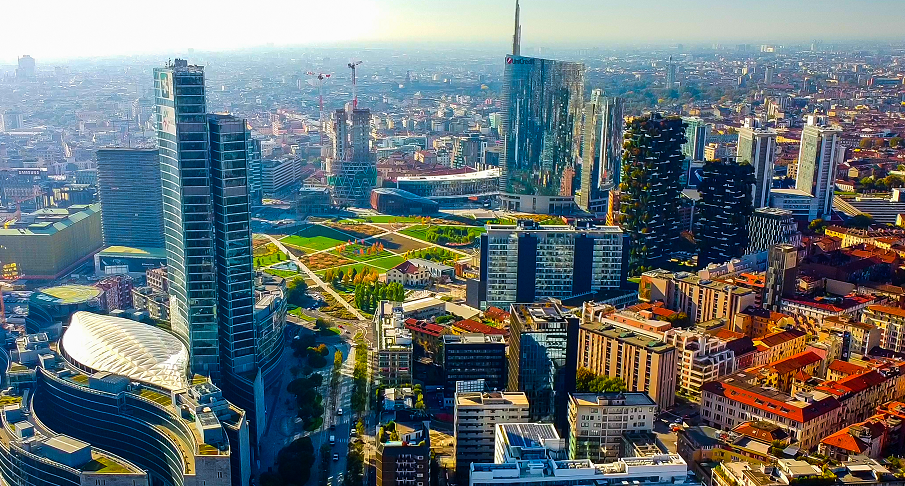 While these upheavals resulted in some transactions being delayed, PE activity overall continued apace with a wave of TMT, industrials & chemicals, and consumer transactions helping to lift quarterly volumes. Total deal value was down by 16% quarter-on-quarter to €63.4bn – although, to put this in context, the value achieved in Q4 2021 (€75.5bn) was the highest on record. Q1’s figures are strong by any conventional yardstick and far above the average of recent years.

Q1 2022 saw the UK and Ireland reach for new highs in terms of the average last-twelve-months (LTM) EV/EBITDA multiple among European regions. Deal volume was robust, rising by a third to 56 from 42 in Q4 2021. Value also rose strongly with the total quarterly deal value (€21.3bn) far exceeding that of other European regions – indeed, second-placed Benelux recorded only a little over half (€11.3bn) the deal value achieved by the UK and Ireland. 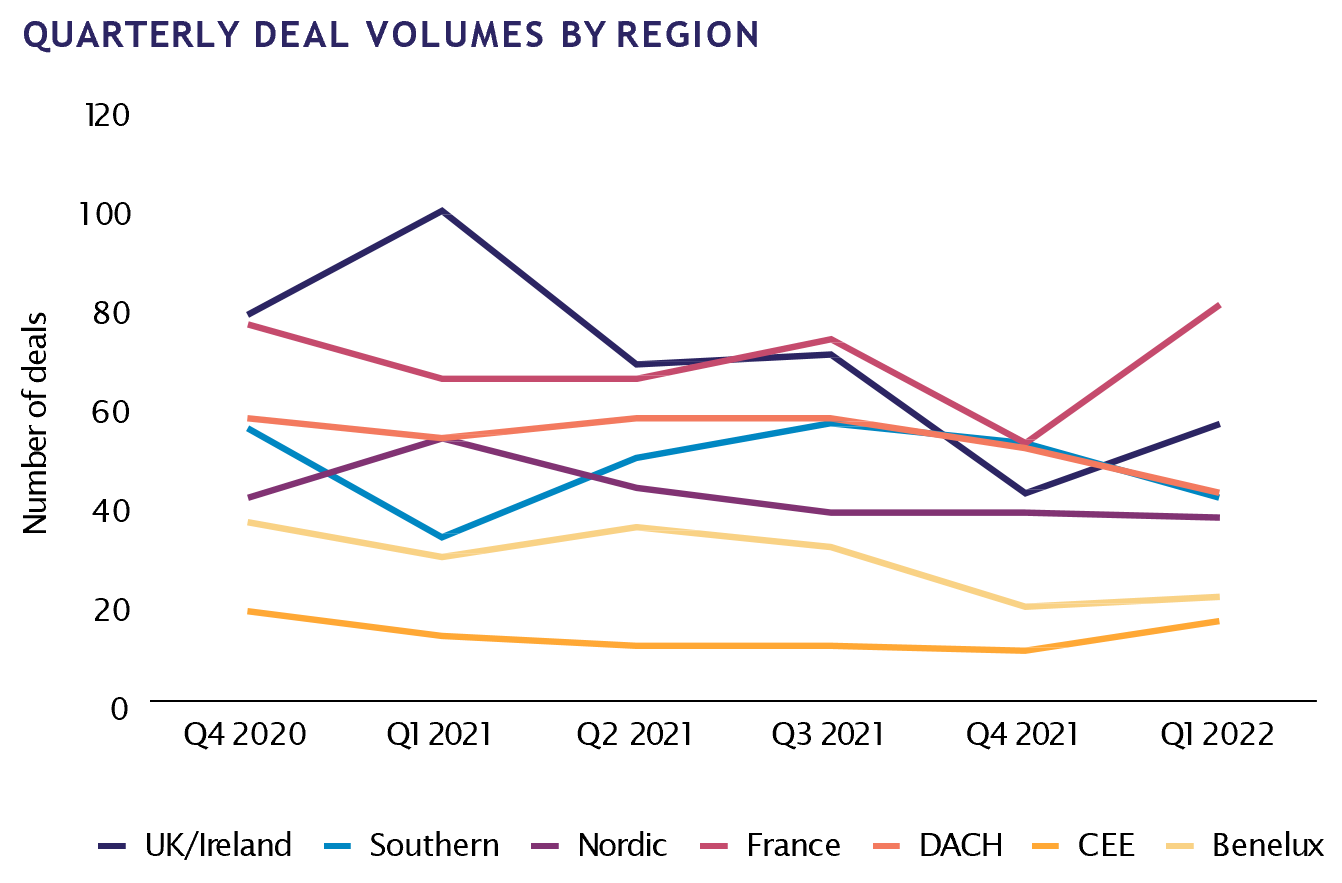 The strong performance of the UK and Ireland is encouraging, particularly in light of the Bank of England raising base rates three times between December 2021 and March 2022. The UK’s monetary tightening – which was flagged well in advance by the Central Bank – appears to have left the appetite for buyouts unscathed. This could bode well for dealmaking in the eurozone as the European Central Bank prepares to hike rates for the first time in more than two years. 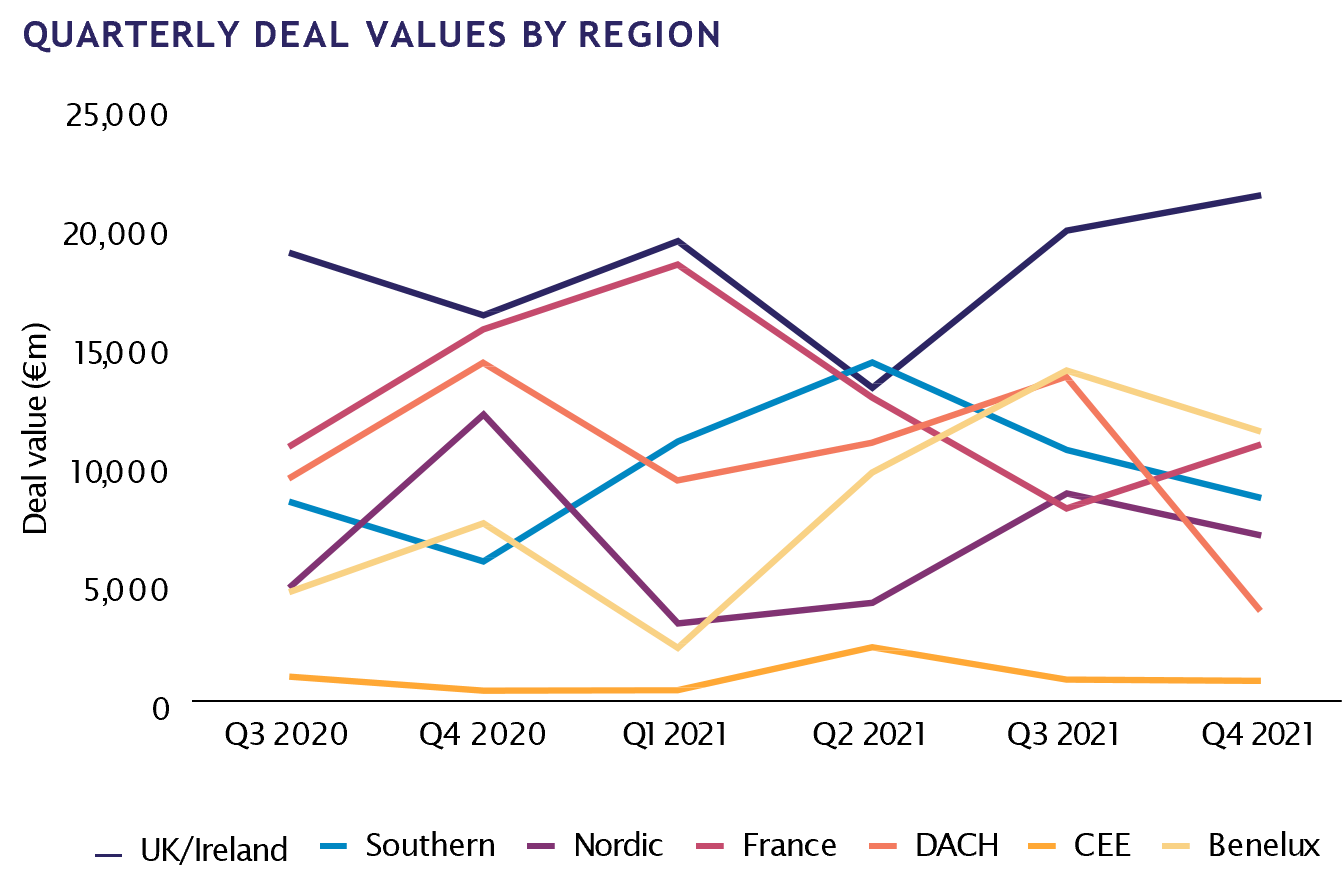 France stands out as Europe’s most prolific deal generator in terms of volume – logging 80 transactions, up 54% from the 52 recorded in Q4 2021, and representing more than a quarter of the regional total – largely on the back of strong activity in the industrials & consumer sectors.

Elsewhere in Europe, the DACH region (Germany, Austria and Switzerland) and the Southern region (Spain, Italy and Portugal) also saw their LTM multiples rise. By contrast, LTM multiples in the Nordics, CEE and Benelux all retreated from the record highs of 2021.

Turning to specific industries, financial services achieved the highest LTM deal multiple ever seen in any sector in Q1 – thanks in large part to the PE-backed acquisition of UK-based specialist insurance provider CFC. This was one of the largest financial services deals of recent years, generating a remarkably high multiple. Performance in the sector was otherwise modest, with deal volume posting a small increase (from six in Q4 2021 to eight in Q1) and deal value down slightly (from €3.2bn to just under €3bn).

TMT’s seemingly unstoppable rise continued in Q1 with the sector’s LTM deal multiple climbing for the sixth consecutive quarter. While total deal value was down from the heady heights of 2021 (€9.2bn versus a quarterly average of €14bn in 2021), TMT deal volume rose quarter-on-quarter from 56 to 70, underscoring the enduring attraction of all things digital.

Healthcare’s LTM deal multiple eased back in Q1 2022 following a prolonged period of strong and consistent rises, suggesting that assets in this much sought-after sector could be trending towards more rational valuations. Both deal volume (from 22 to 33) and aggregate value (from €8.7bn to €11.1bn) were up quarter-on-quarter. Increasing demand for private healthcare post-pandemic continues to spur activity in this sector.

Food and beverage was another star performer in Q1

Food and beverage was another star performer in Q1, clocking up its second-highest deal value on record (€9.1bn, second only to the anomalously large €16bn logged in Q4 2017). Volume rose marginally quarter-on-quarter, from 14 to 15. The sector’s LTM deal multiple remained unchanged from the high achieved in Q4 2021.

As with healthcare, food and beverage dealmaking is being driven by fundamental shifts in post-pandemic consumer behaviour, including the mushrooming interest in personal wellbeing. Indeed, two of the sector’s top buyouts in Q1 involved dietary supplement specialists.