According to Forrester, the global cloud computing market will be worth £178bn by the end of 2018. As cloud increasingly dominates all elements of the technology market, we look at the key trends driving growth and M&A in the sector.

Cloudex is Clearwater’s own index of leading global cloud technology businesses operating in software, services, hardware and infrastructure. It focuses on the financial performance and valuation of these companies versus the population of more general technology vendors.

Our hypothesis is that over time, the gap between Cloudex and the wider indices will close, as cloud computing increases its penetration into that wider population of technology companies. The efficiency and improvements brought over time by SaaS, VOIP, virtualisation and other manifestations of cloud computing, will see technology stocks generally outperform other sectors as this revolutionary period unfolds.

The human resources SaaS market saw a handful of private equity investments this quarter. Growth in this market has been driven by a number of key factors including the replacement of manual processes, a need for dynamic data insight with real time solutions, and a demand for mobile applications. Most businesses need some form of HR ability, ensuring a large addressable market.

Another area that saw a significant number of investments this quarter was transportation software. Technology is helping to make the concepts of intelligent traffic management and smarter parking a reality. Equally, as public transport increasingly comes under funding pressure, it can help bring about more intelligent transport networks, greater passenger safety and more flexible payment methods.

This monitors the change in the market capitalisation of our Cloudex index, against the NASDAQ Composite Index and the FTSEtechMark index over the past four years.

Since the start of 2018 the gap between cloud companies and the NASDAQ composite index, significantly widened, with cloud companies outperforming their on premise counterparts. There have been a number of reasons for this.

Firstly, there has been a huge number of very large cloud deals this year, which has helped to fuel investor confidence in the market. These include IBM’s purchase of RedHat for $34bn, Broadcom’s acquisition of CA Technology for $19bn and
Microsoft’s purchase of GitHub for $8bn.

Secondly, cloud businesses still have some of the most impressive margins on the market. For instance, Salesforce continues to regularly hit gross margins in excess of 70%. This coupled with strong subscription-based recurring revenue streams, continues to make cloud businesses amongst the most sought after assets.

*The Cloudex index excludes Facebook, Amazon, Apple, Netflix, Google(Alphabet) because they are either not pure cloud or would distort the data too much. 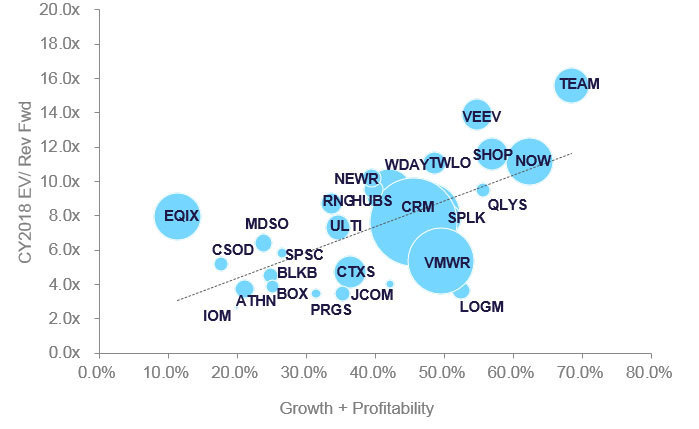 Last year saw the second lowest number of technology IPOs since 2009. Yet there was a significant change in the first half of 2018, with a frenetic number of public listings. Many made the headlines including Spotify’s direct listing stock market debut. Internet security firm Avast, also launched one of the top five largest technology IPOs of all time on the London Stock Exchange with a value of over £3bn.

There was a slowdown in the third quarter of 2018, but some notable names still made their debuts. The shares of Surveymonkey, an online feedback software provider surged 42% on its stock market entry. The business has over 16 million active users but only 4% actually pay for the service and it is still losing money. The challenge for the business is effectively converting its number of free users into money generating subscribers.

Upworks also launched a successful IPO with its shares soaring 50% higher on its debut. As businesses increasingly demand independent professionals, Upworks has built a market leading position with 375,000 freelancers earning money by gaining work through the platform. Whilst it has a high recurring revenue model as with Surveymonkey, it is not yet profitable.

Battle of the big three- race for public cloud dominance

A key trend within the cloud services market over the last four years has been the battle between Amazon Web Services, Google Cloud and Microsoft Azure, for market share in the highly lucrative public cloud market. All three are publicly listed and have invested significant capital in innovation and gaining market share. The data here, as a snapshot of the overall market, demonstrates that in 2018, 87% of participants used third party hosting services of which 75% used Amazon Web services. Expectations for the future show a continuing move to third party application delivery, with Amazon maintaining its market lead. 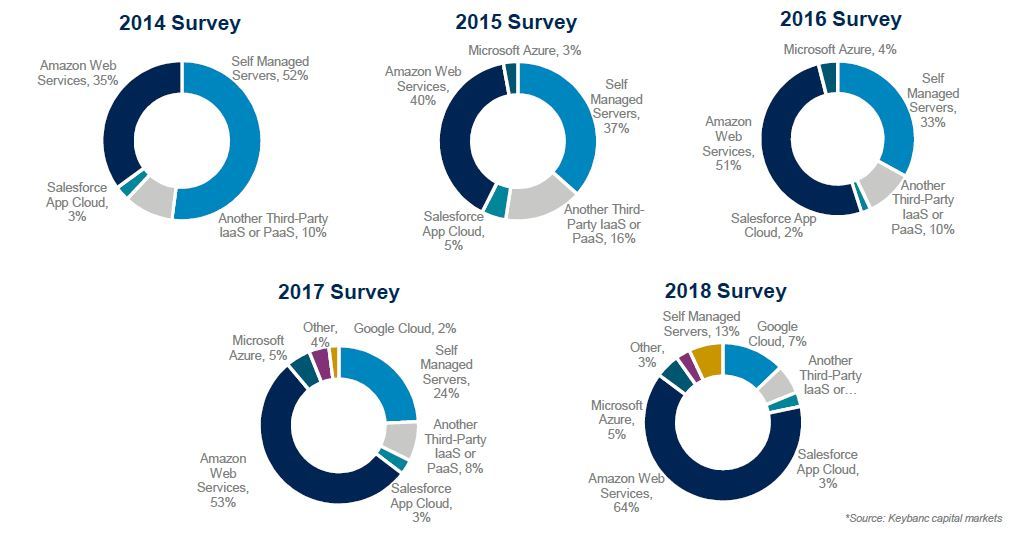