The past year has been an extremely busy one for M&A activity across the food and beverage industry.

Rising M&A across the sector is being driven by changing tastes as consumers continue to become more health aware and conscious of how their food is sourced. In particular this is resulting in an increased number of higher-end and niche product deals as consumers switch to healthier foods over cheaper and faster alternatives.

There is strong demand for products which cater for specific dietary needs, while the beverage industry is seeing particularly strong activity in vibrant markets such as craft beer. As with foods, consumers are increasingly looking towards higher quality and more distinctive products.

Last year was also strong in terms of overall deal volumes with the number of transactions recorded in Europe again surpassing more than 700 deals. We expect M&A activity to continue in a similar fashion over the next 12 months, driven by the combination of strong trade – in response to these changing consumer spending patterns – and investors wanting to get in as early as possible into these areas of high growth.

With record levels of capital to deploy, private equity and venture capital were highly active in both mid-market and large cap food and beverage (F&B) deals in 2017.

Start-ups and mid-market F&B companies are attractive due to high growth prospects and the potential for innovation in the sector. On the other hand larger, well established brands and food companies give private equity funds an opportunity to de-risk their portfolios and provide a defensive guard to the cyclical trends of fast moving consumer goods. F&B product demand will continue to grow as the global population increases, whereas the demand for non-staple and luxury goods is at the mercy of economic cycles.

Recent times have seen the emergence of specialised, F&B focused private equity and venture capital funds, and this trend has continued over the past year. One example is France-based FnB Private Equity, a mid-market fund dedicated to the F&B sector. Its first investment was made in Eric Bur, a French fine foods specialist.

Another private equity deal saw Unilever dispose of its global spreads business to KKR for €6.8bn. The portfolio of brands included market leaders such as Becel, Flora and ProActiv. This acquisition by KKR exemplifi es the desire by private equity funds to invest in mature businesses.

Another deal saw private equity group Aksìa Group SGR acquire Italian business CRM, a producer of dough and other grain products. The company has a low-sodium and low-fat content product offering and also has a yeast and gluten-free range. 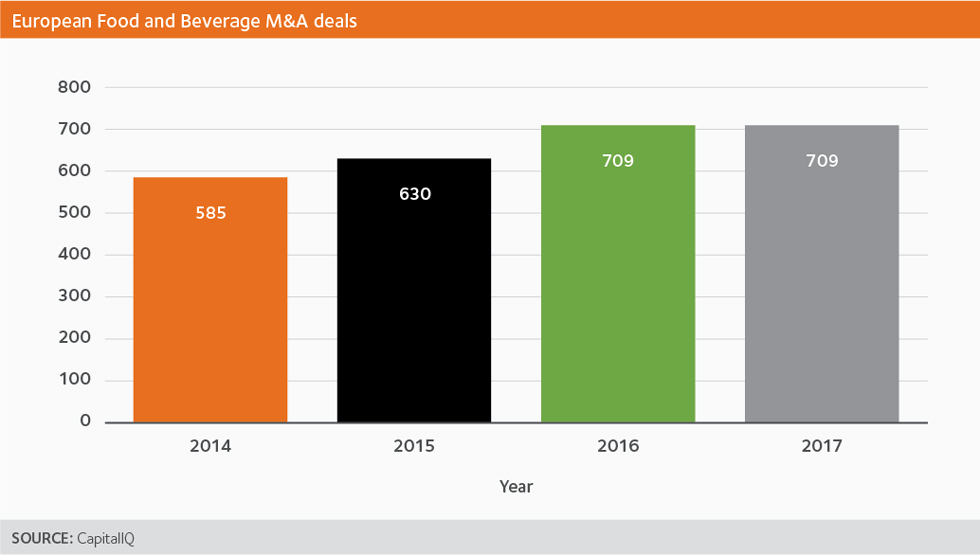 A strong trend is the acquisition of smaller, high-end artisanal brands by large multinational companies. As disposable incomes rise, consumers are substituting own brand and generic products to more upmarket competitors.

One example was the acquisition of US firm Blue Bottle Coffee by food and beverage titan Nestlé which is already a major player in the premium coffee market through Nespresso. This acquisition increases Nestlé’s reach in the US, diversifying its presence from the in-home market to retail coffee shops. Nestlé reportedly paid approximately €365m for a 68% majority stake in the company.

Another example was the acquisition of a majority stake in Irca, a large European producer of artisanal pastry, ice cream and baking products, by the Carlyle Group.

Over the last four years the company has experienced strong revenue and EBITDA growth, resulting in current revenues of around €250m and EBITDA of c. €40m.

Consumers are increasingly aware of their own health and wellness with more access to information than ever before, enabling them to make more informed healthy choices. This is driving consumers to increasingly choose natural and organic products, as they turn away from highly processed foods.

One deal saw Unilever purchase the British organic tea brand Pukka which has expertise in herbal teas. The brand was the fastest growing organic tea company in the world in 2016, according to Euromonitor. In 2016, the global market for green, fruit and herbal tea was worth €1.6bn1.

Danish Crown acquired German organic beef producer Teterower Fleisch in a deal which illustrates how F&B companies are keen to acquire organic and natural goods across all sub sectors. Teterower Fleisch is already a leading player in the northern European meat industry and one of the largest cattle slaughterhouses in Germany.

Another deal involving Nestlé saw it acquire Sweet Earth Foods, a leading plant-based foods manufacturer in the US. Through this acquisition Nestlé gained an immediate foothold into the plant-based foods segment which is expected to become a $5bn market by 20202. Sweet Earth, the makers of plant-based meat substitutes, vegetable burritos and natural, organic and non-genetically modified meals, is taking advantage of global macro trends including increased uptake of alternative diets such as vegetarian, vegan and paleo, and a whole host of ‘flexitarian’ hybrid diets.

Better for you snacks

RXBar was the fastest growing nutrition bar brand in the US prior to its acquisition. The consideration for the deal was €515m and represents a projected EBITDA multiple of 12x –14x.

Biscuit International, one of Europe’s leaders in the sweet biscuit making market, acquired Northumbrian Fine Foods, a leader in the UK’s gluten and milk-free biscuit market.

A major deal saw independent craft brewer BrewDog acquire craft cider company Hawkes. BrewDog plans to support the growth of Hawkes in the UK and internationally, while expanding its range.

Irish Distillers Group acquired Eight Degrees, a craft brewery based in Cork, Ireland. The primary objective of the deal was to ensure a long-term beer supply to sustain the growth of Jameson Caskmates, a variation of the flagship whiskey that is aged in craft-beer seasoned barrels.