Research into the financial performance of mid-market UK e-commerce firms with a turnover of up to £250m highlights huge changes in consumer behaviour since the pandemic struck.

UK e-commerce companies have seen significant growth in revenues and repeat orders since lockdown, according to one of the most detailed studies of their financial performance since the pandemic struck.

The report from consumer analytics specialist Conjura and global M&A advisory firm Clearwater International, provides clear proof that the pandemic has accelerated the move towards online shopping and is driving major change in consumer behaviour.

The strong performance of these companies also stands to pique the interest of investors as the e-commerce space continues to remain very attractive, despite the wider financial headwinds in the economy.

Richard O’Donnell, Head of Consumer and Partner at Clearwater International said, “There is still a lot of investor appetite among private equity to do deals in this space, but they will only want to invest in the very best businesses. This study illustrates how a lot of e-commerce businesses have demonstrated real robustness and strong growth over recent months, which shows there are deals to do."

The study observed the financial performance of 21 e-commerce companies with a turnover of between £5m and £250m. It deliberately excluded businesses that have performed particularly strongly during the pandemic, in sectors such as food delivery and online pharmacy, in order to provide a more general overview of the health of e-commerce companies in the UK.

From the moment that the UK national lockdown was announced in late March, businesses began to see weekly revenues rise.

It also excluded any companies that have subsequently gone out of business in recent months due to COVID-19. One of the most striking findings was how those companies which took a bold stance and increased social marketing budgets in the wake of the crisis are now reaping the dividends, with revenues in some companies rising in some weeks by as much as 60% compared to 2019.

In recent weeks these aggressive companies have been as much as doubling their social marketing spend compared to last year.

Added O’Donnell, “Companies that effectively used their customer data to back up very targeted paid search and social marketing activity have been rewarded with far higher sales. When the lockdown came into force in March this might have been seen as a very brave and risky move, but the strategy has paid off for them.”

Companies initially saw revenue falls in late February and early March as global concerns over COVID-19 grew. But then, almost from the moment that the UK national lockdown was announced in late March, businesses began to see weekly revenues rise, a rise that was also matched by increased time spent on websites by consumers. Interestingly, companies have since seen revenue growth outstrip session time on websites, thereby suggesting strong growth in conversion rates.

For some companies much of this revenue growth has been achieved despite the fact that they have not significantly upped their marketing budgets. In fact, only from early June did marketing spend start trending up despite the fact that revenues were increasing from early April onwards, suggesting that many firms initially operated a ‘wait and see’ approach while the business world was in a state of flux. 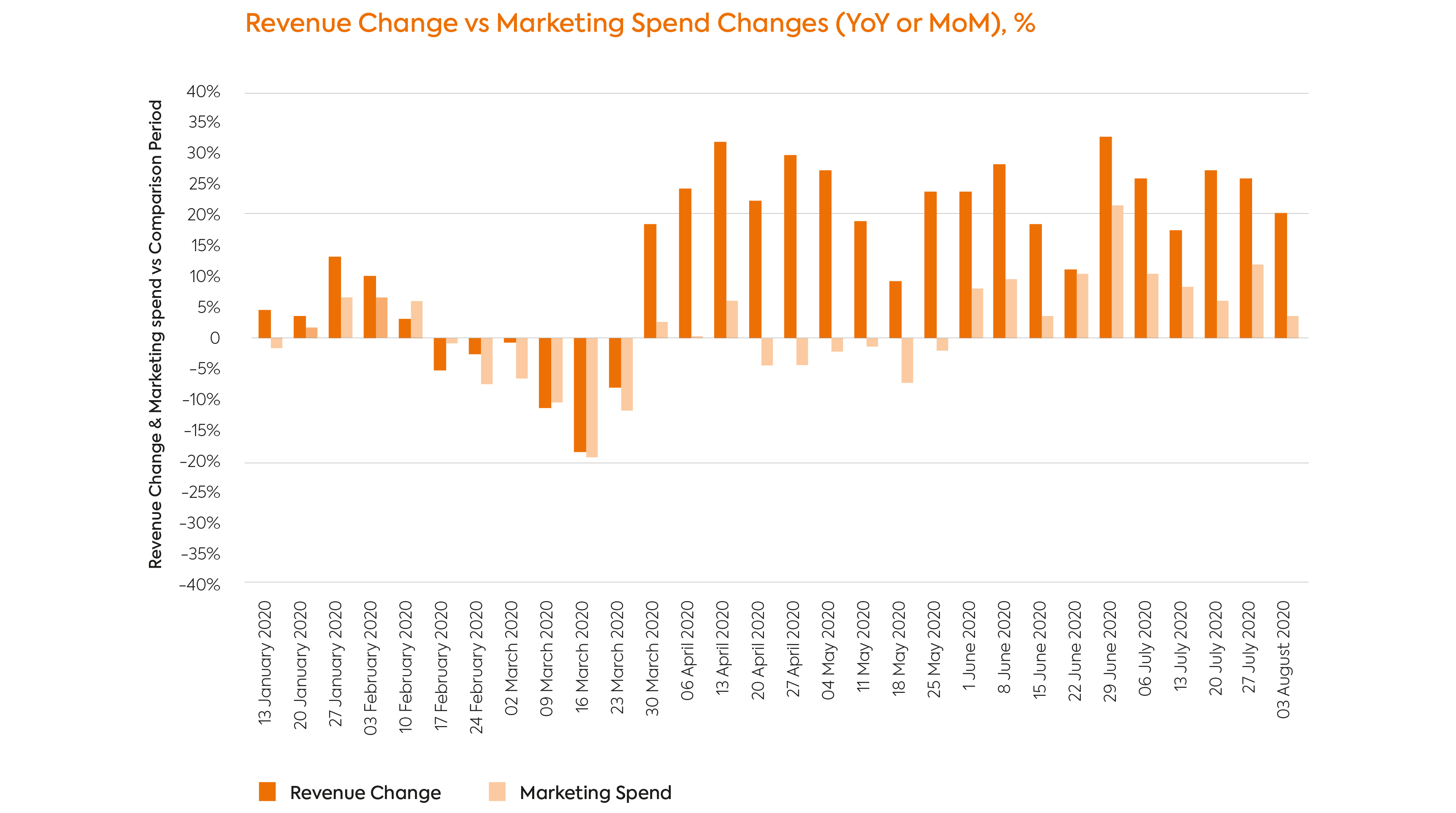