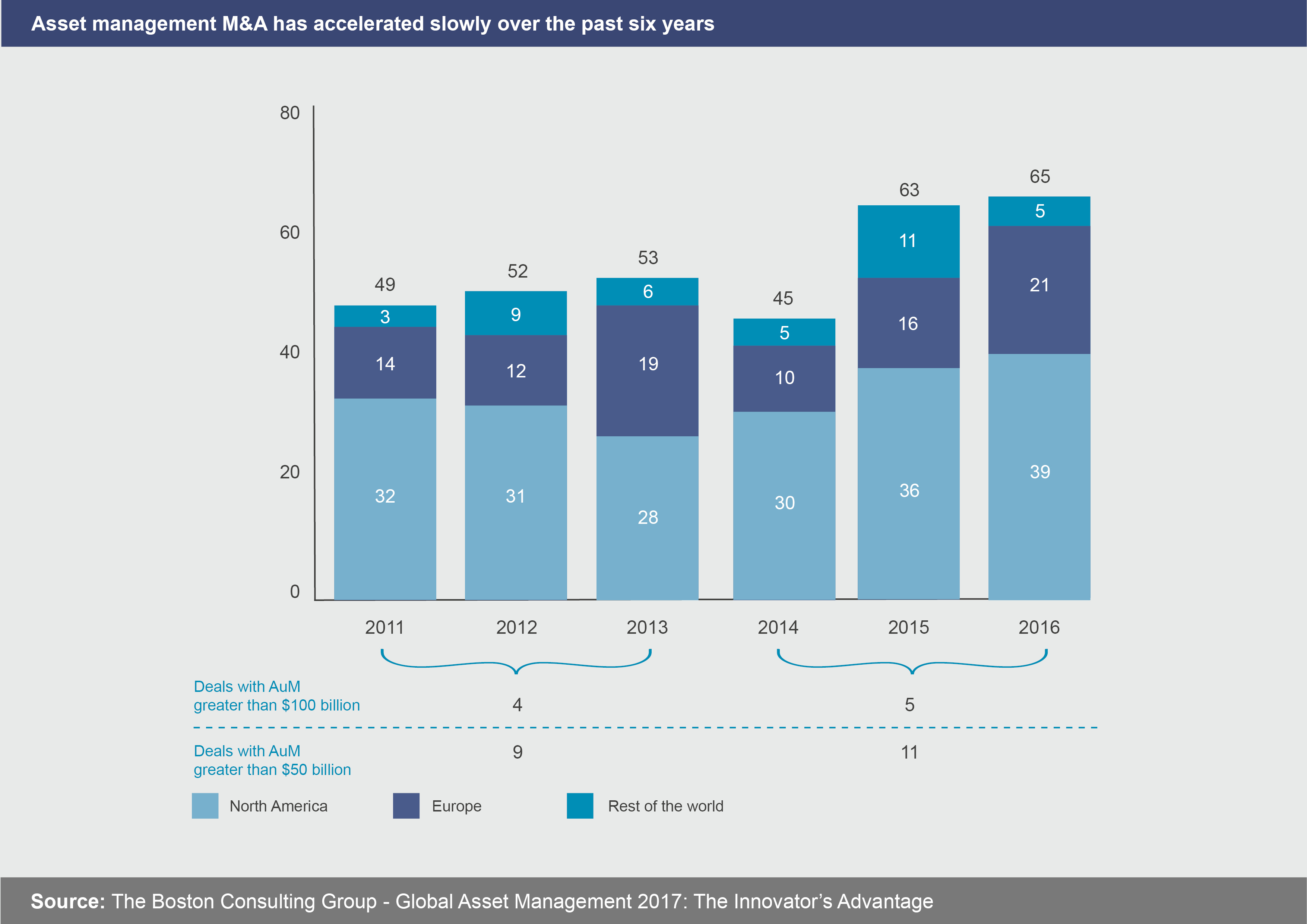 As a recent report1 noted, changes in technology, asset performance, and customer preferences leave many players in the industry with unsustainable business models. Some may be able to make the required changes organically, but M&A will often be the more attractive option. It concludes that deal activity will likely accelerate both in quantity and magnitude with deals becoming larger and often cross-border.

At the same time it says the distribution of asset management is changing as intermediaries consolidate and firms move towards direct distribution. Small and mid-size asset managers typically have an incomplete product offering, a partial distribution network, or both. Their profits are being squeezed which makes them attractive targets.

Leading global players may also wish to take advantage of the falling market share of bank units which provide mostly in-house wealth management services, and of the fact that banks are increasingly considering their wealth management units as non-core activities.

Aberdeen Asset Management merged with Standard Life to form one of the world’s largest investment companies with assets under administration of €737bn. Standard Life has around 4.5 million customers and is based primarily in the UK, with operations in Ireland and Germany. More than one in six people auto-enrolled into a workplace pension in the UK have a Standard Life workplace pension. The companies first announced plans for an all-share merger in early 2017 to cut costs and gain scale.

Mattioli Woods has made a number of acquisitions, including MC Trustees and Amati Global Investors, while the Succession Group has also bought dozens of firms. Most recently it bought four businesses from its affiliated membership – Prosperitas Independent Financial Advisers, Sigma Asset Management, Norris and Fisher Independent Financial Services and Tim Burton – which added €593m to its funds under management.

Amundi acquired Pioneer Investments, the asset management business of Italian bank UniCredit, for €3.5bn. The deal brought a further €222bn of assets under Amundi’s control making it one of the world’s largest investment managers.

M&A across the Independent Financial Adviser (IFA) continues to be very strong. In particular, the market is seeing ongoing consolidation driven by smaller companies being forced out of the market by regulatory pressure. Large IFAs are looking to create value through synergies such as central office consolidations, while most market consolidators are seeking to move up the average client investment curve in segments where clients can afford to pay premiums for more sophisticated financial advisory services and where there is more scope for cross-selling of products.

AFH Financial Group is one of many UK groups that has been on a major acquisition spree in recent years. The firm now has more than €2.3bn of funds under management and recent acquisitions include Parker Sage Independent Financial Advisers and Eunisure. AFH recently completed a follow-on €20m equity offering.

Bellpenny and Ascot Lloyd merged and are now trading under the unified Ascot Lloyd brand. The newly formed group is advising on over €6.8bn of clients’ funds.