As innovator pipelines have deepened and the complexities of developing and manufacturing more recent generations of pharma (including biologics) have increased, the need to simplify manufacturing operations and reduce operating expenditure has led to the emergence of the CDMO industry.

Although many CDMOs today are multi-disciplinary, there are very few true one-stop-shops and pharma companies will typically use a range of CDMOs across their product portfolios selected on development/manufacturing technologies or expertise, manufacturing capacity or geographical location.

Despite high levels of M&A activity, the sub-sector remains highly fragmented. The top five players have approximately 15% total market share and there is a long tail of over 300 companies worldwide offering CDMO services. 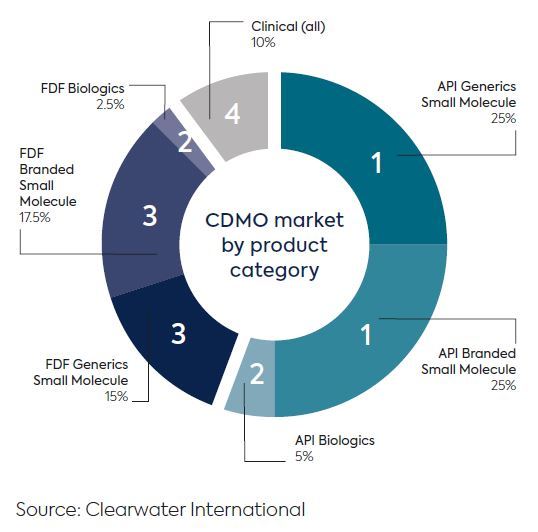 ﻿CDMO activities can broadly be divided ﻿into three fields: product development, ﻿manufacture of active pharmaceutical ﻿ingredients (API), and manufacture of ﻿finished dosage forms (FDF) - all of ﻿which are required from the production ﻿of small-scale clinical batches to largescale ﻿commercial production. As such, ﻿once a dedicated manufacturing line is ﻿established and validated at a CDMO, ﻿it is often difficult, time consuming ﻿and costly to switch CDMOs, meaning ﻿partnerships between pharma companies ﻿and their CDMOs are often long-lasting.

1. API
The commercial small molecule API market is roughly divided equally between originator products and generics. Although generic APIs typically deliver lower margins to manufacturers, this is often compensated by the ability to supply multiple customers with the same API.

3. Finished Dosage Forms (FDF)
FDF represents a smaller share of the market than API, a majority of which is accounted for by oral solids. However, the oral solids market is relatively mature and lower growth than other FDFs including liquids, semi-solids and injectables. Injectables is the highest growth FDF segment. High levels of demand for injectables (primarily resulting from the growth in biologics and oncolytics) combined with high technological barriers to entry has resulted in manufacturing shortages of sterile injectables. Pre-filled syringes (PFS) and other more complex injectable delivery systems (including auto-injectors) are the categories undergoing highest levels of growth.

4. Clinical
Despite clinical manufacture representing only a minority of the CDMO market, it is crucial for securing customers and building relationships that support commercial scale manufacturing.