In line with the last two quarters, the Nordic region again saw the highest average multiples paid in PE transactions, also up nearly 5% on the previous quarter. Average multiples in the region have consistently been over 10x since Q3 2018.

Following a steady multiple decline through 2019 the DACH region saw the largest increase against the previous quarter with a jump of over 6%. Benelux and France saw more modest increases of 5% and 3% respectively.

The UK and Ireland was the second hottest region in terms of multiples, up 1% on the same quarter in 2018 but down 1% on the previous quarter. Since Q4 2018, average valuations in the region have been relatively stable, varying by less than 0.5x in the period.

The Southern region also saw a decline in multiples when compared to the previous quarter, despite an increase of over 2% against the same quarter in the previous year. Average multiples in the region have been fairly consistent since Q3 2018.

The healthcare sector was the next richest sector in terms of valuation despite a small decrease in average multiples from the previous quarter. The sector delivers consistent valuations with the range of averages shifting by no more than 0.5x over the last six quarters.

Modest growth was also seen in industrials and chemicals in comparison to the previous quarter and the same quarter in the previous year.

The consumer sector saw a slight reduction in average multiples for the first quarter since Q4 2018. Prior to Q4 2019, multiples steadily increased by an average of 1% per quarter. 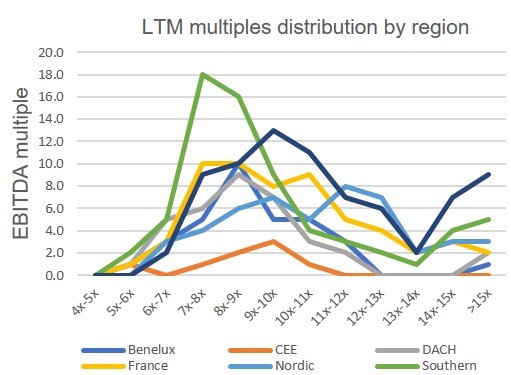 Business services saw the most significant jump in average multiples in the quarter, increasing by over 4%. However, this increase comes from their lowest average valuation seen for a number of quarters in Q3 2019. Prior to Q4 2019, the sector had seen valuations reduce by an average of over 3% per quarter since Q4 2018. In terms of deal size, and for the second quarter in a row, the highest valuations were seen in transactions >€1bn, despite being down over 2% on the previous quarter.﻿