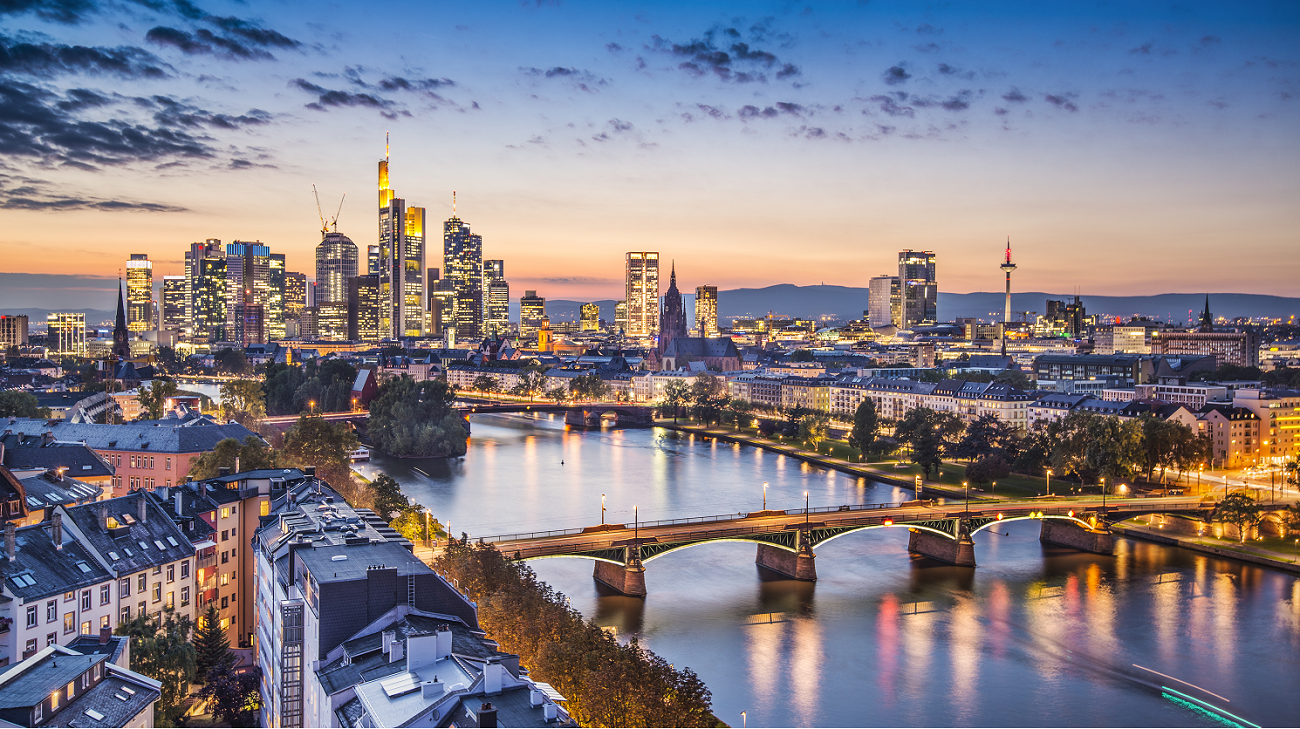 PE buyouts in Europe in 2021 shattered all previous records, with both volume and value soaring. By the end of the year, dealmakers had logged a total of 1,273 transactions – 24% higher than the previous peak in 2019. It was an even more spectacular picture in terms of deal value, with transactions for the year totalling €278bn, up 50% on the previous record of €186bn, again from 2019.

PE buyouts in Europe in 2021 shattered all previous records, with both volume and value soaring

Abundant dry powder – estimated at €1.15tn, according to Preqin – continues to propel PE activity. Indeed, a key feature of 2021 was the increasingly dominant position of PE in the overall deal landscape. To put this in context, PE-backed deals accounted for 23% of all M&A volume in Europe in 2021 – the highest proportion on record.

Buttressed by these formidable levels of activity, long-term multiples for PE-backed deals in Europe continued their seemingly unstoppable rise. In Q4, the average EV/EBITDA multiple over the last 12 months (LTM) for European PE-backed transactions climbed to 12.8x from 12.4x the previous quarter. TMT stands out as the top sector, with the average LTM deal multiple climbing to 15.1x in Q4 – the first time any sector has crossed the 15x threshold.

Among the diverse regions covered in our analysis, Q4’s hottest performers were the UK & Ireland and Central & Eastern Europe (CEE). The former recorded a quarterly average multiple of 14.3x, the highest in Europe, while the latter logged the second highest average multiple (14.1x) as well as the strongest quarter-on-quarter change (up by 1.5x).

Concerning key sectors, attention continues to centre on TMT, which saw average LTM multiples of 15.1x in Q4, up from 14.3x in the previous quarter. The food & beverage and financial services sectors performed similarly brightly, and in fact recorded faster quarter-on-quarter multiple growth – up 1x and 2.7x respectively – than PE-favourite TMT. 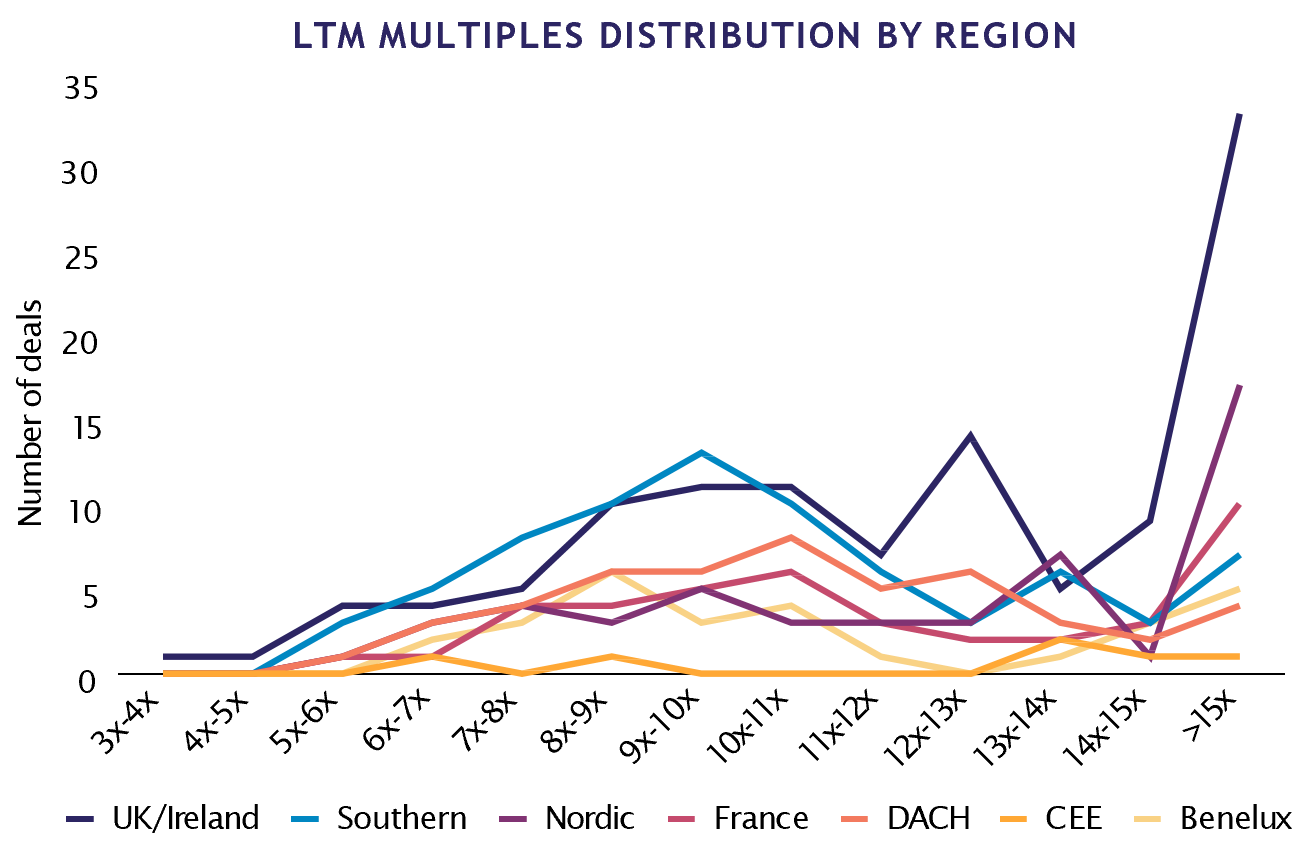 Zooming in on the regional action, the UK & Ireland stands out with an LTM deal multiple of 14.3x in Q4, up from 13.5x in the previous quarter. This reflects a phenomenal year for buyouts: our data show that PE deal value leapt 58% year on year in the UK & Ireland, while deal volume soared by 49%. Q4 marks the ninth consecutive quarter in which the long-term deal multiple for the region has either risen or remained the same. No other European region has an unbroken record of this length.

In second place – and the biggest regional riser of Q4 – was CEE, which saw its LTM multiple jump to 14.1x. This marks an increase of 1.5 turns of EBITDA versus the previous quarter, albeit on a relatively small number of transactions.

The Nordic region’s run of quarter-on-quarter rises since Q3 2020 went into reverse in Q4 2021, with the LTM deal multiple sliding to 13.8x from 14.3x in the previous quarter – although it remains comfortably ahead of the Europe-wide average of 12.8x. 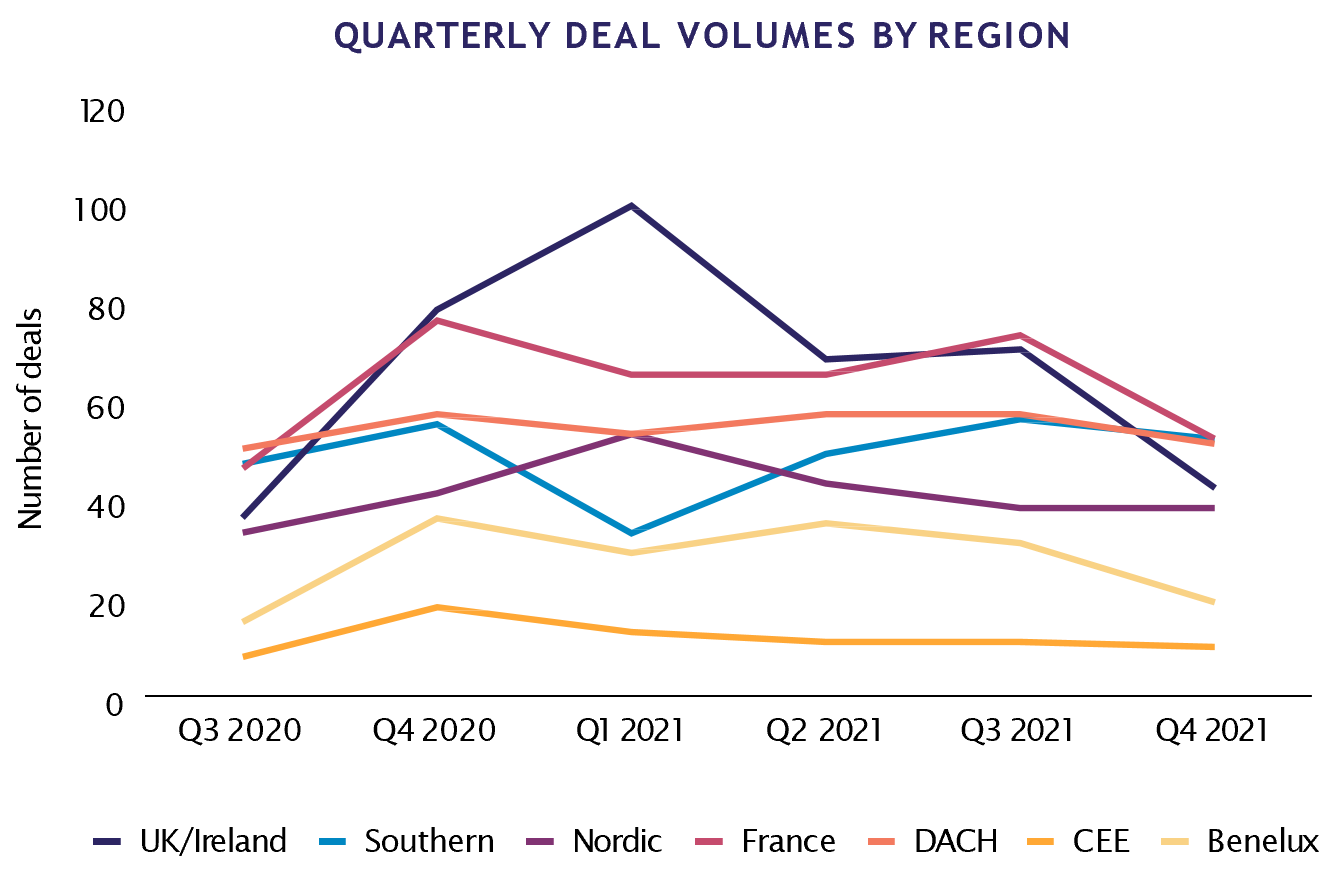 France, one of Europe’s most prolific buyout markets, continued its upward trajectory in Q4 with an LTM deal multiple of 12.5x, up from 12x in Q3. PE accounted for 33% of all French M&A deals in 2021, up from 31% in 2020. This is a noticeably higher proportion than neighbouring Germany (28%) and far ahead of the European average (23%). Against this background, France has seen its long-term deal multiple rise in every quarter since Q1 2020.

TMT broke new ground in Q4 with an LTM deal multiple of 15.1x – the first time in recent history that any sector has crossed the 15x threshold. The industry has performed extraordinarily well during the COVID-19 pandemic, with major shifts in consumer preferences and working practices driving a deluge of PE dealmaking in 2021. TMT not only commanded the highest deal multiple in Q4, but also stands out for having the fastest-growing multiple of any sector – up by 3.5 turns of EBITDA over the last six quarters.

Like TMT, the healthcare sector has thrived during the pandemic, with long-term multiples showing a strong and unbroken record of quarterly rises since Q1 2020. The LTM multiple for Q4 2021 – 14.6x – is the highest recorded by the industry in recent times.

TMT broke new ground in Q4 with an LTM deal multiple of 15.1x

Financial services also performed well in Q4 with an LTM multiple of 14.9x, although this was based on a relatively small number of deals with reported multiples. Elsewhere, the food & beverage sector stands out as one of the biggest quarterly risers, climbing by one turn of EBITDA to 12.5x – signalling a renewed appetite for deals in a sector that was hit especially hard by the COVID-19 crisis. 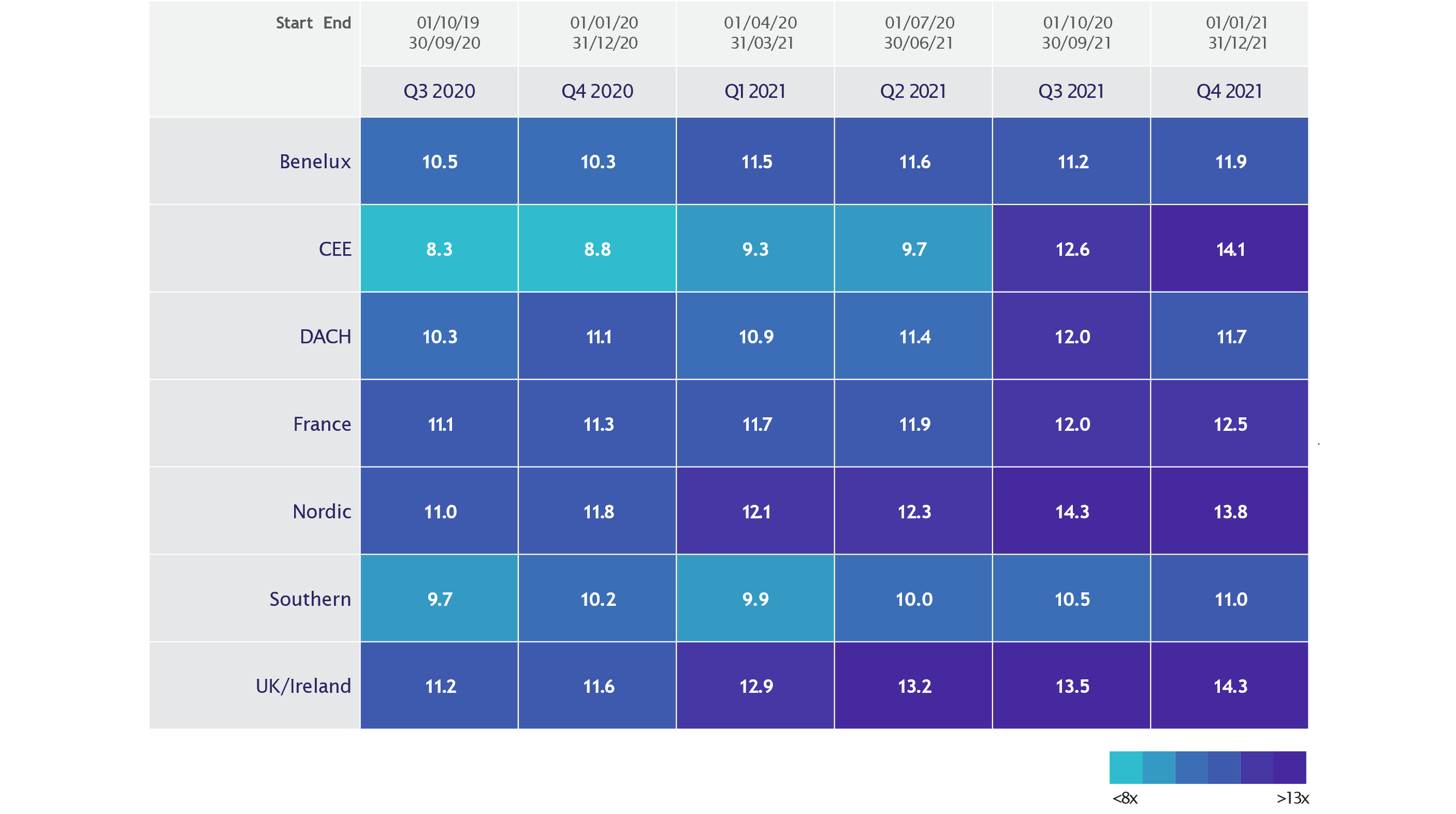 The bigger the deal, the higher the multiple. This rule proved to hold largely true in Q4 2021

The bigger the deal, the higher the multiple. This rule proved to hold largely true in Q4 2021. Looking at deal sizes, the biggest transactions – those with a price tag of €1bn or more – achieved an LTM multiple of 17x, marking a new high-point for multiples. Deals in this bracket also saw the steepest multiple rise of any valuation grouping, up by 2.5 turns of EBITDA. High-multiple TMT and healthcare transactions, in particular, were among the major drivers. 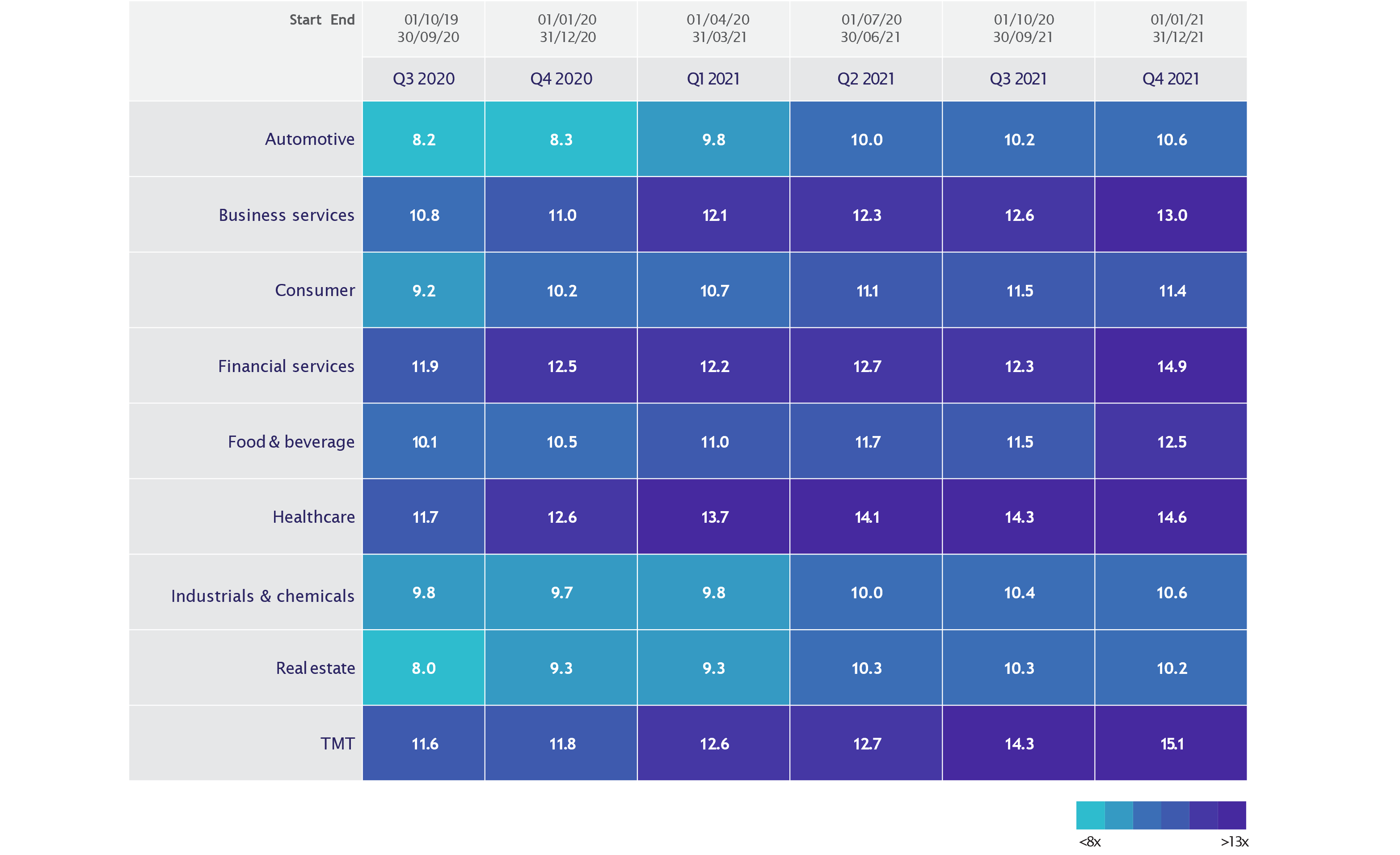