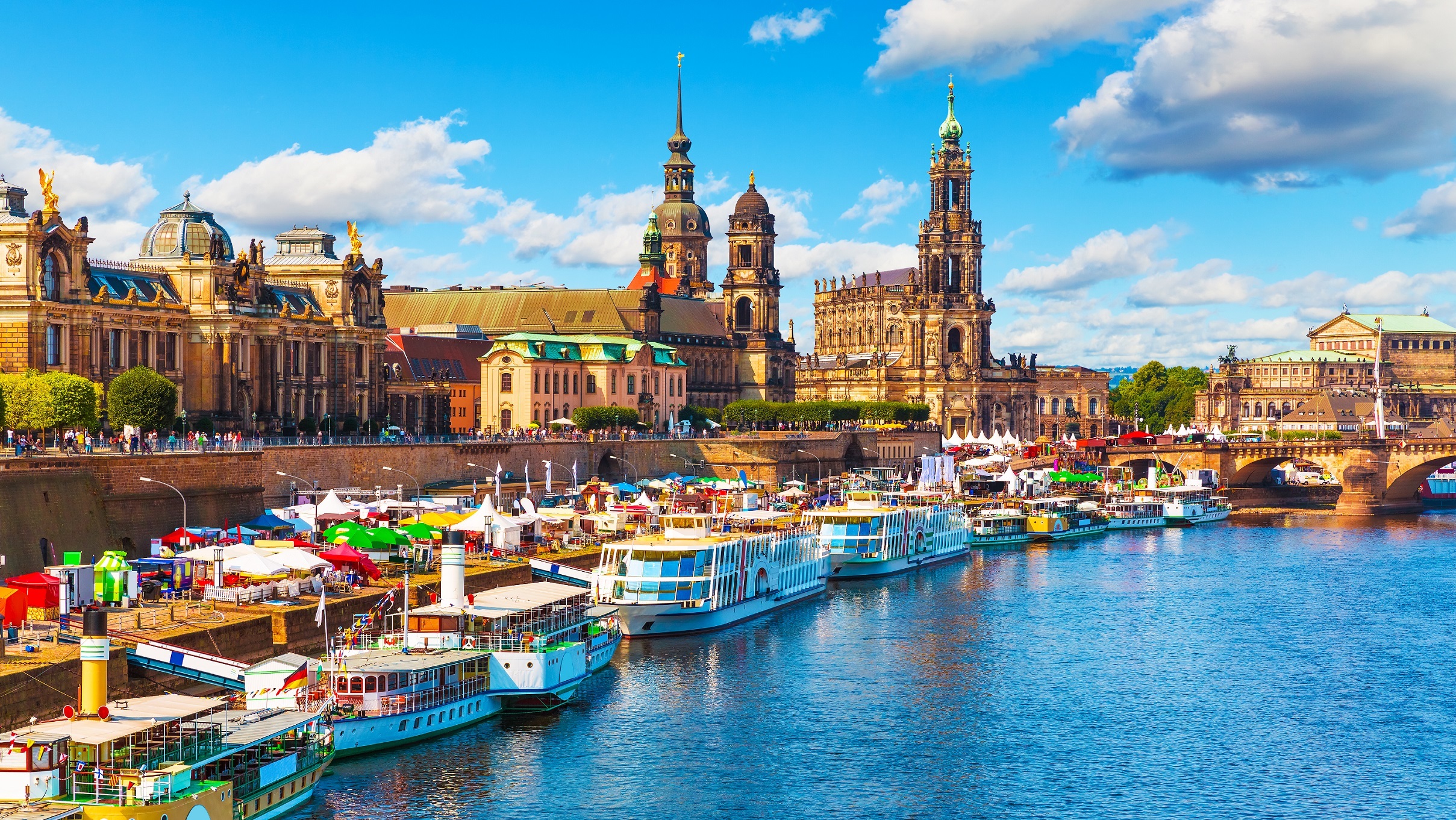 Dealmakers shrugged off concerns about inflation, supply chain constraints and rising COVID-19 cases to propel European PE activity to near-record highs in Q3 2021. Indeed, 2021 is now set to break all previous records for both volume and value. Total deal value in YTD 2021 (€203bn) has already comfortably exceeded that of any previous full year, while deal volume is on track to hit a new all-time high.

the average multiple paid in PE-backed deals jumped to 12.4x

This helped to push LTM multiples into record territory in Q3. TMT was red hot, with the twelve-month multiple jumping to 14.3x – up from 12.7x in Q2. This was the sharpest rise in any sector. Healthcare and business services also broke new ground, achieving multiples of 14.3x and 12.6x respectively. Against this background, the average multiple paid in PE-backed deals jumped to 12.4x versus 11.8x in Q2.

Analysis of quarterly multiples reveals that Q3 2021 was the hottest quarter ever recorded. Looking at regional performance, the Nordics stood out with a quarterly average multiple that leapt to 18.5x in Q3 from 11.7x in Q2. The DACH region witnessed a similarly stellar surge, achieving a quarterly multiple of 15.2x versus 10.1x in the previous quarter. 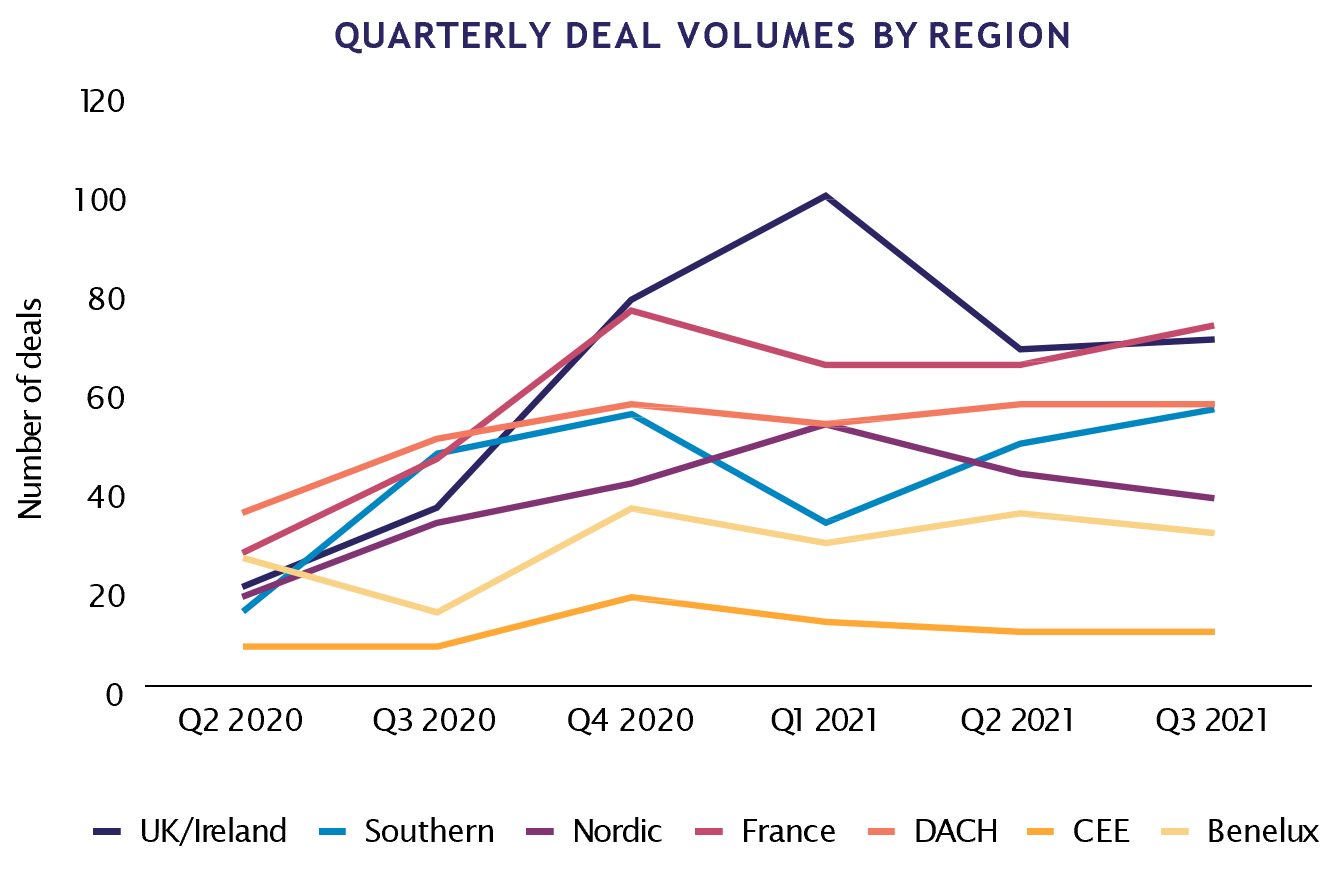 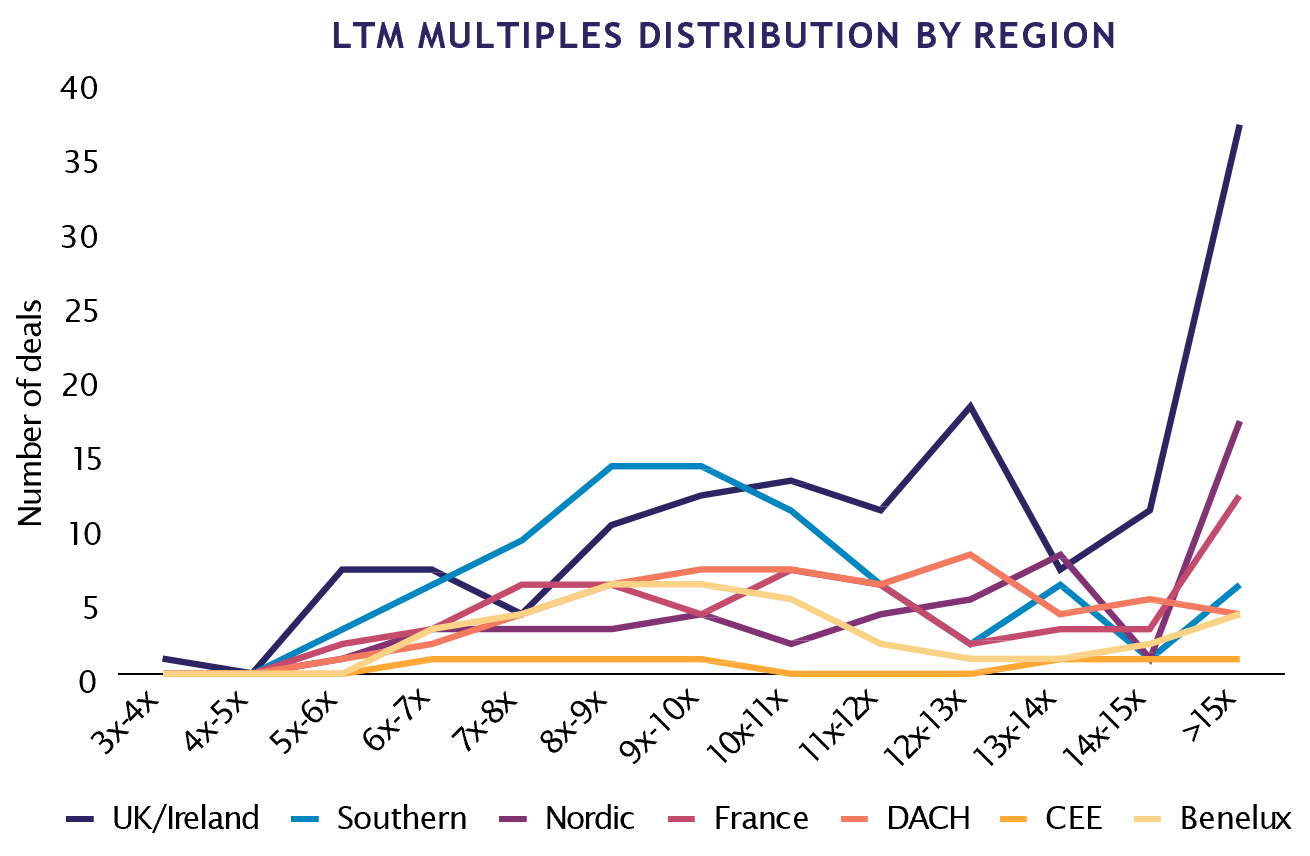 Regional records were smashed across the continent in Q3 as dealmakers raced to deploy dry powder. Focusing on LTM multiples, the Nordic region took the top spot with a deal multiple of 14.3x in Q3 (up from 12.3x in Q2) – easily leapfrogging the UK and Ireland, which had dominated the multiples chart in the previous two quarters. The Nordic’s Q3 LTM multiple is the highest for any European region on record since 2014.

Despite its slide into second place, the UK and Ireland still stands out as one of Europe’s hottest regions for valuations with the LTM multiple for Q3 rising to 13.5x (a new high) versus 13.2x in the previous quarter. The UK and Ireland also saw deals with a multiple of 15x or more surge to a record high.

In third place – and registering the sharpest increase in its LTM multiple – is the CEE region, which saw its deal multiple leap from 9.7x in Q2 to 12.6x in the third quarter, although the number of deals involved was relatively small compared with other regions.

Elsewhere, DACH and France broke into new territory. Both regions saw their LTM deal multiple reach the 12x threshold for the first time. In the case of France, a significant proportion of deals involved a LTM multiple of 15x or more. 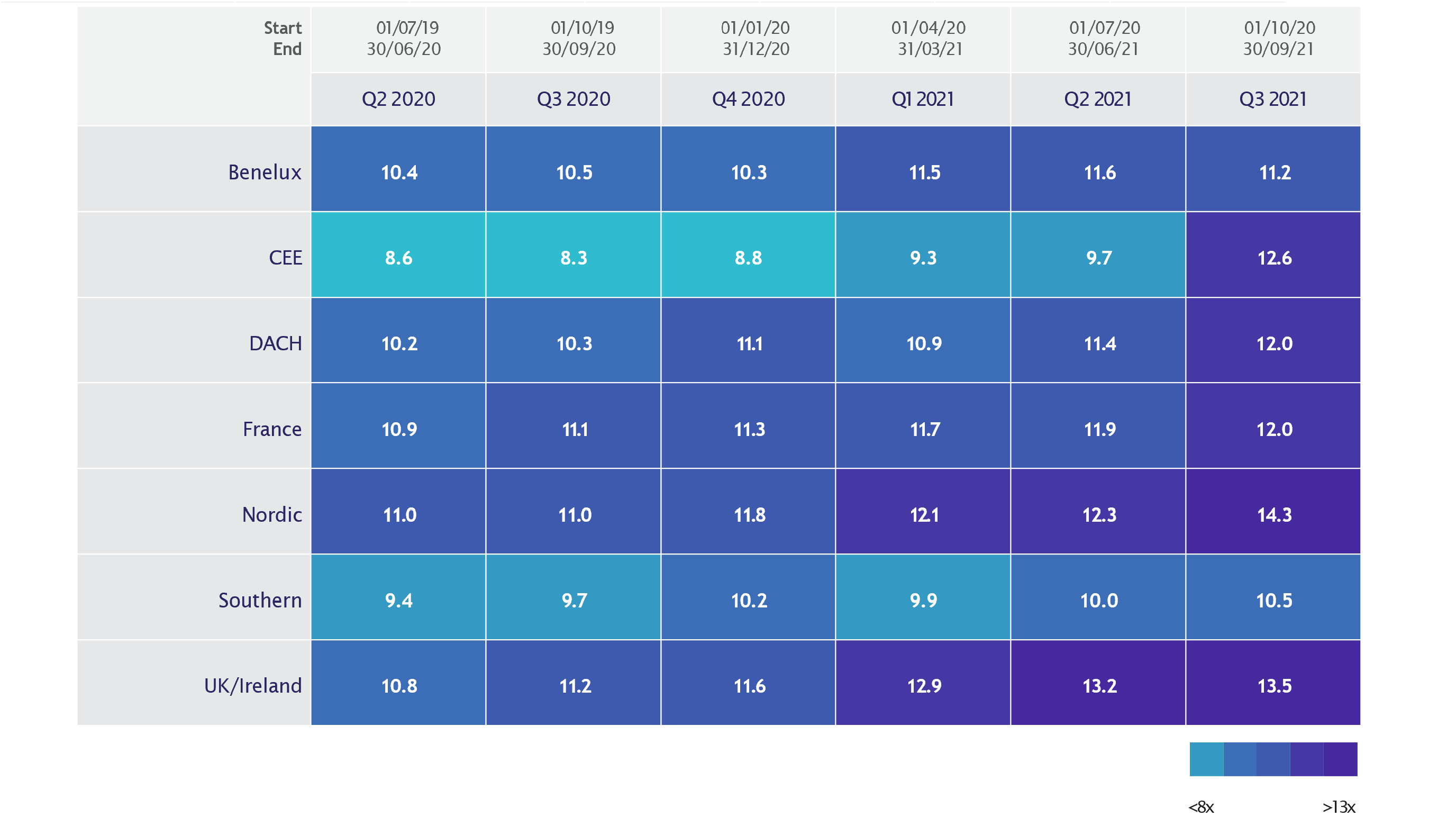 LTM multiples in both the TMT and healthcare sectors scaled new heights in Q3 2021. Spurred by ferocious competition for assets, the multiple for TMT deals leapt from 12.7x in Q2 to 14.3x in the third quarter – a recordbreaking deal multiple for TMT and one of the biggest quarter-on-quarter increases on record for any sector.

Accelerating demand for tangible goods in the wake of the pandemic helped to spur LTM multiples in the consumer, industrials and chemicals, and automotive sectors in Q3. The consumer multiple rose to 11.5x in Q3 from 11.1x in the previous quarter, while industrials and chemicals ticked up from 10x to 10.4x. Automotive nudged ahead, clocking up a multiple of 10.2x in Q3 versus 10x in Q2, while real estate at 10.3x remained unchanged on the previous quarter. 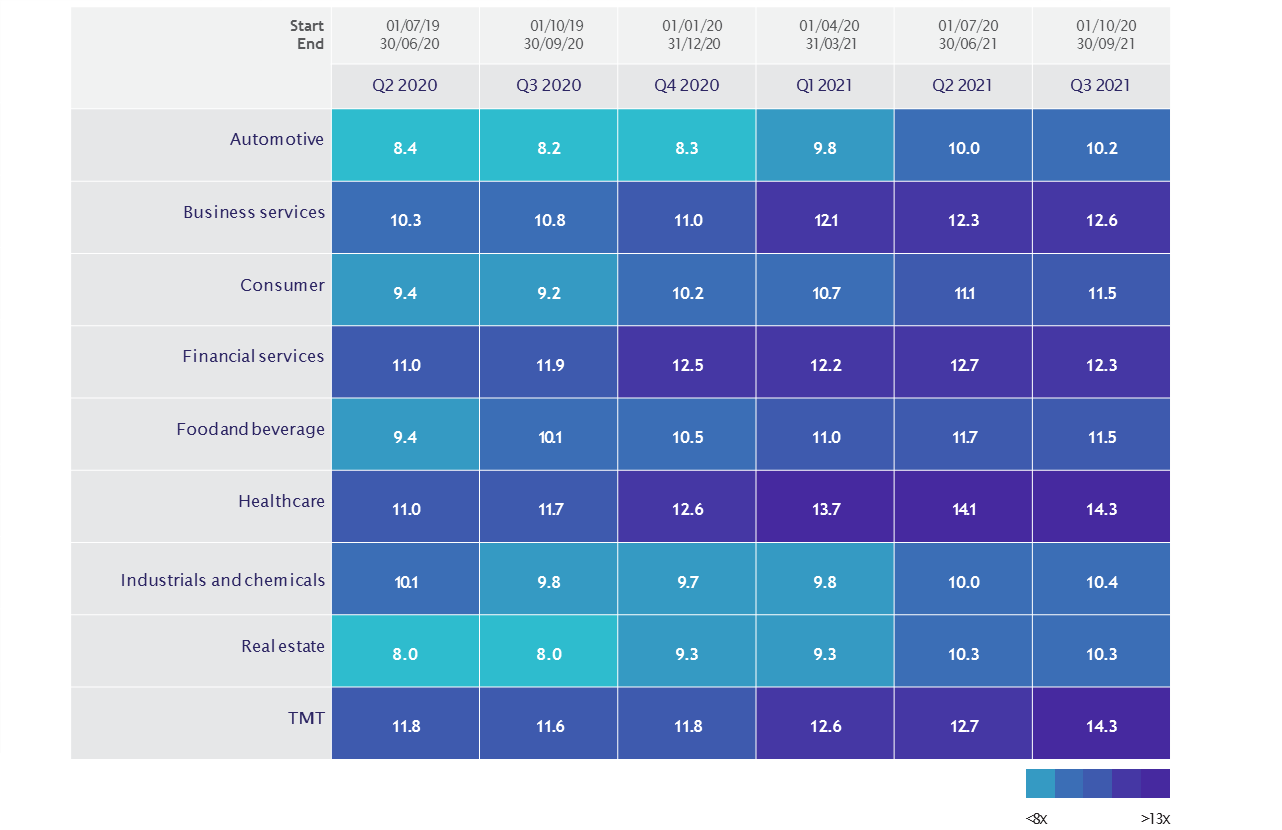 Focusing on deal size, LTM multiples moved decisively upwards in the majority of value categories in Q3. The highest multiples – and biggest quarter-on-quarter increases – were found both at the lower (sub-€50m) and higher (€500m-€1bn and €1bn+) bands of the market. Looking first at the higher end of the market, the continuing clamour for assets continued to drive LTM multiples into new territory. Deals in the €500m-€1bn band stand out: the LTM multiple for this segment rose to 15.2x – the highest multiple for any price band in Q3. Meanwhile, the multiple commanded by transactions in the top price bracket (deals worth €1bn or more) climbed to 14.5x, up from 14.2x in the previous quarter.

Multiples at the lower end of the market also stand out. LTM multiples in this segment typically trail the top end significantly. But 2021 is not a typical year, as evidenced by the LTM deal multiple for transactions in the sub-€50m bracket, which jumped from 11.3x in Q2 to 13.3x in Q3 – a new high.