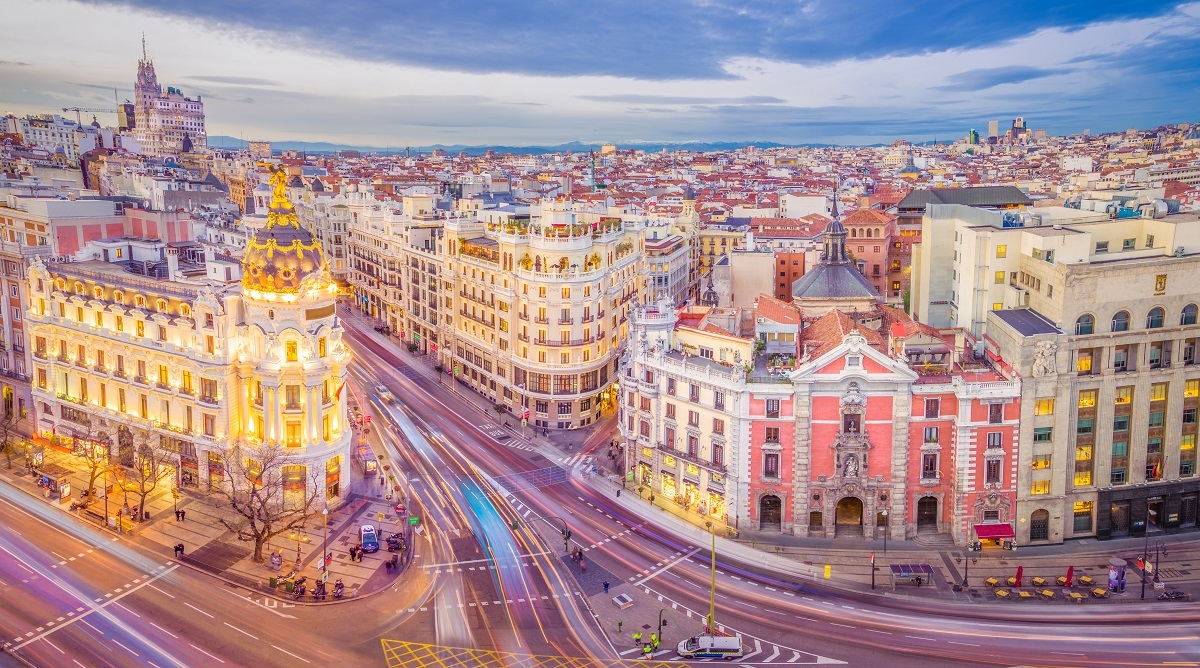 Dealmakers have put the pandemic behind them and they are looking towards growth opportunities in the post-COVID world – notably in healthcare, TMT, financial services and business services. Competition for high-quality targets in these and other sectors continued to propel deal multiples ever higher in the second quarter. In Q2, the average EV/EBITDA multiple over the last twelve months (LTM) for European PE-backed transactions climbed to 11.8x. This is a new record and it follows an unbroken run of five quarterly increases.

Looking at deal size, the majority of transactions took place within the sub-€50m bracket, although the number of transactions with deal value above €500m continued to rise quarter-on-quarter, signalling the continued strength of M&A activity at the top end of the market. 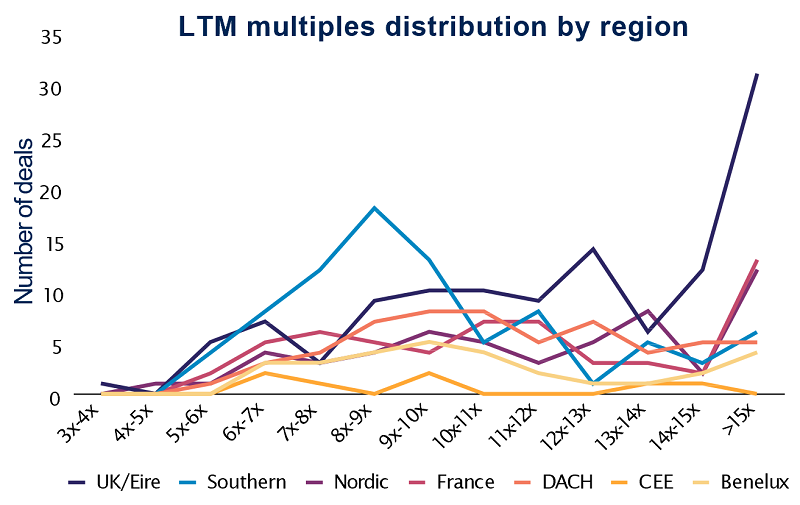 While deal multiples at the top end of the market show signs of levelling off or easing back, those for lower-value transactions continued to rise in Q2. Multiples in all three of the lower-value brackets (sub-€50m, €50m-€100m and €100m-€250m) all saw increases in the second quarter. The sub-€50m group (which typically accounts for 50% of deals by volume) saw the biggest rise, with the average deal multiple reaching 11.3x – the first time the multiple for this price bracket has crossed the 11x threshold in more than six quarters. 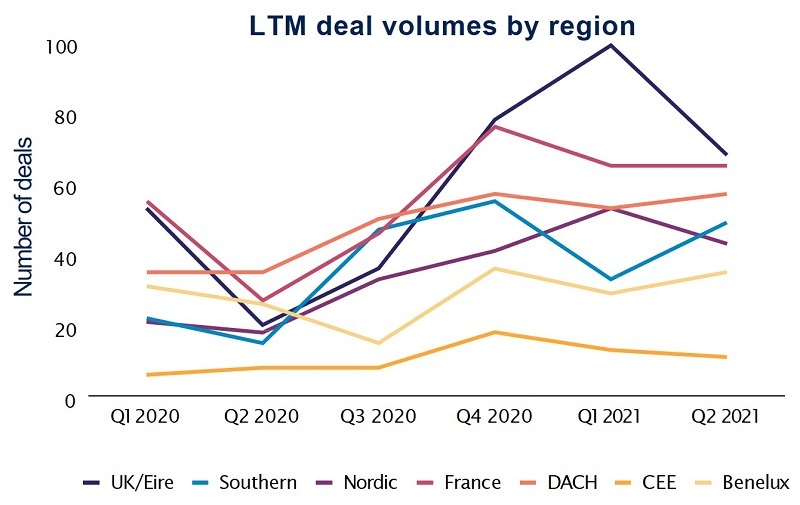 The UK and Ireland stands out as the top regional hotspot for the third quarter in a row, registering the most deals of any region (68 transactions), and the highest total deal value (€19.3bn). The average multiple for deals in Q2 rose to 13.2x versus 10.8x in the same quarter last year – the biggest year-on-year increase seen in any region.

The UK and Ireland also recorded the highest number of transactions with a multiple of 15x or higher over the last 12 months (31 deals). The region’s closest rival, France, came in with 13 deals, closely followed by the Nordics (12 deals).

The Nordic region recorded the second highest European deal multiple (12.3x) of Q2, although total deal value (€3.2bn) was down sharply compared with the previous quarter (€12bn), in which a handful of very large deals were struck, inflating that three-month period’s figures. The Nordic region is the only one in which the average deal multiple has remained at 11x or above in every quarter since the onset of the pandemic in Q1 2020. 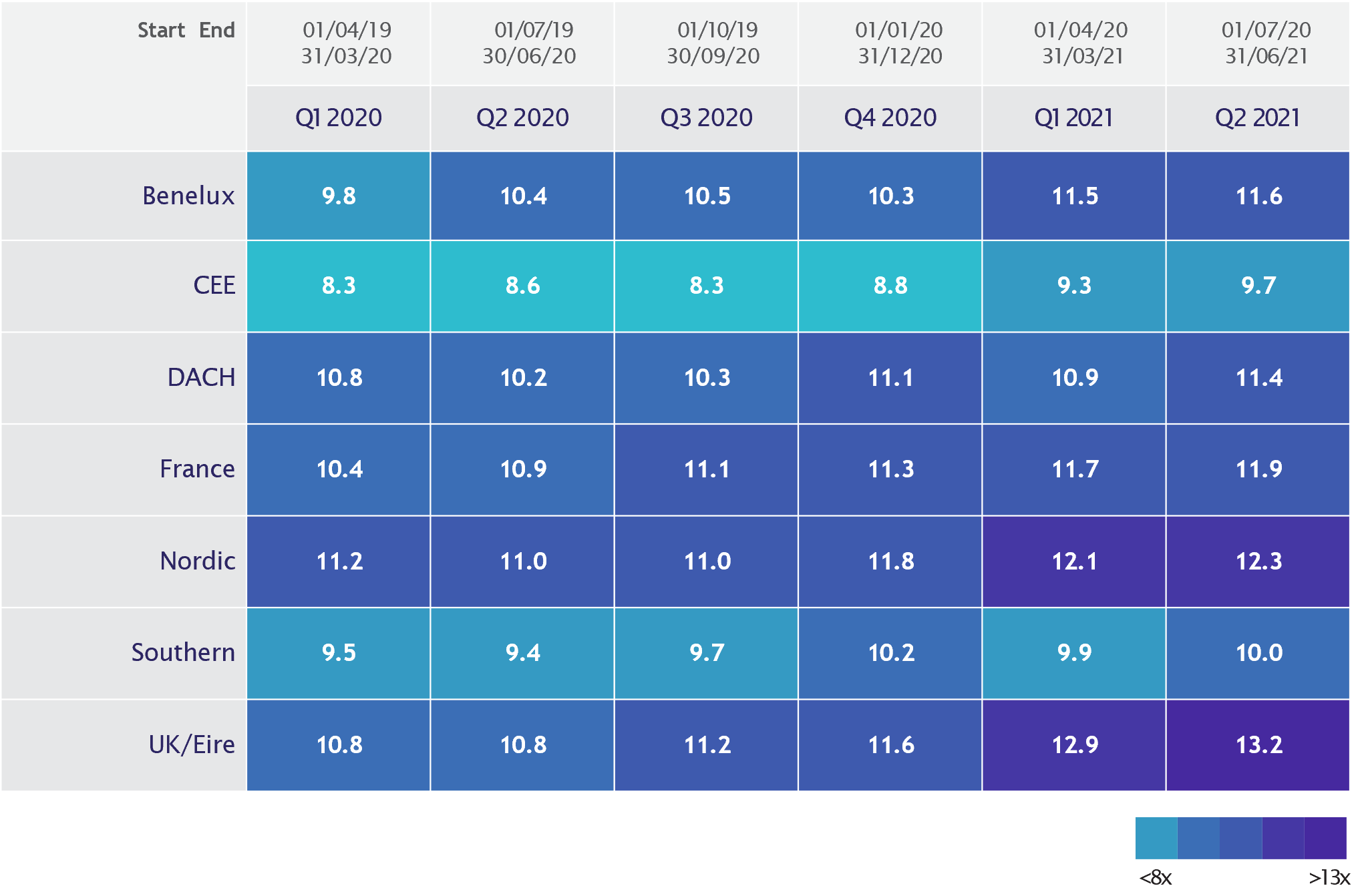 Building on strong performance in average multiples since the start of the pandemic, France took third place with a deal multiple of 11.9x. The country has the distinction of being the only one in which the average multiple has risen consistently quarter-on-quarter since the onset of the pandemic in Q1 2020. French deal volume in Q2 2021 was unchanged versus the previous quarter (65 transactions), but the total value of deals jumped 17% to €18.4bn – Europe’s second-highest deal total of Q2.

Also of note is the Southern region of Europe. This region not only saw the biggest increase in deal volume (up 49%) but also the sharpest increase in overall deal value, with total transactions worth €10.9bn – up 86% on the previous quarter – with that total driven in large part by one massive transaction. At 10x, however, its average deal multiple was the second lowest of any region in Q2 2021.

Healthcare scaled new heights with an average deal multiple of 14.1x in the second quarter, reflecting the continuing focus on this crucial sector by dealmakers in the aftermath of the pandemic. This is the first time the multiple for any sector has exceeded 14x in more than six quarters, and the third consecutive quarter in which healthcare multiples have exceeded those of any other sector. Healthcare deal volume in the second quarter was up by 48% compared with Q1, although deal value slid 19% to €9bn.

As with healthcare, the strong growth prospects for TMT and financial services continue to drive multiples into new territory. TMT and financial services took joint second place in terms of deal multiples, both rising to 12.7x in Q2 2021, up from 12.6x and 12.2x respectively in the first quarter. Turning to deal activity, TMT volume was down 11% in Q2 versus the first quarter, while value slipped 12% to €12.5bn (nevertheless, this was nearly four times higher than the same quarter in 2020). Financial services also saw volume slide in Q2, although total deal value shot up 76% on the previous quarter to reach €4.9bn.

Business services was the fourth hottest sector with an average multiple of 12.3x – a significant increase on the same quarter last year (10.3x). Deal volume in this sector was up 11% quarter-on-quarter, with deal value rising 5% to €10.4bn.

Although it suffered noticeably when the pandemic began and saw its multiples fall to new lows, the food and beverage space has recorded a remarkable recovery. The sector saw its average deal multiples fall to 6x in Q2 2020, but more than doubled to reach a stellar 13.8x during the same period this year. The only sector that saw a decline over this period was industrials and chemicals, which was lower in Q2 2021 (10x) than it was in the same quarter a year ago (10.1x). 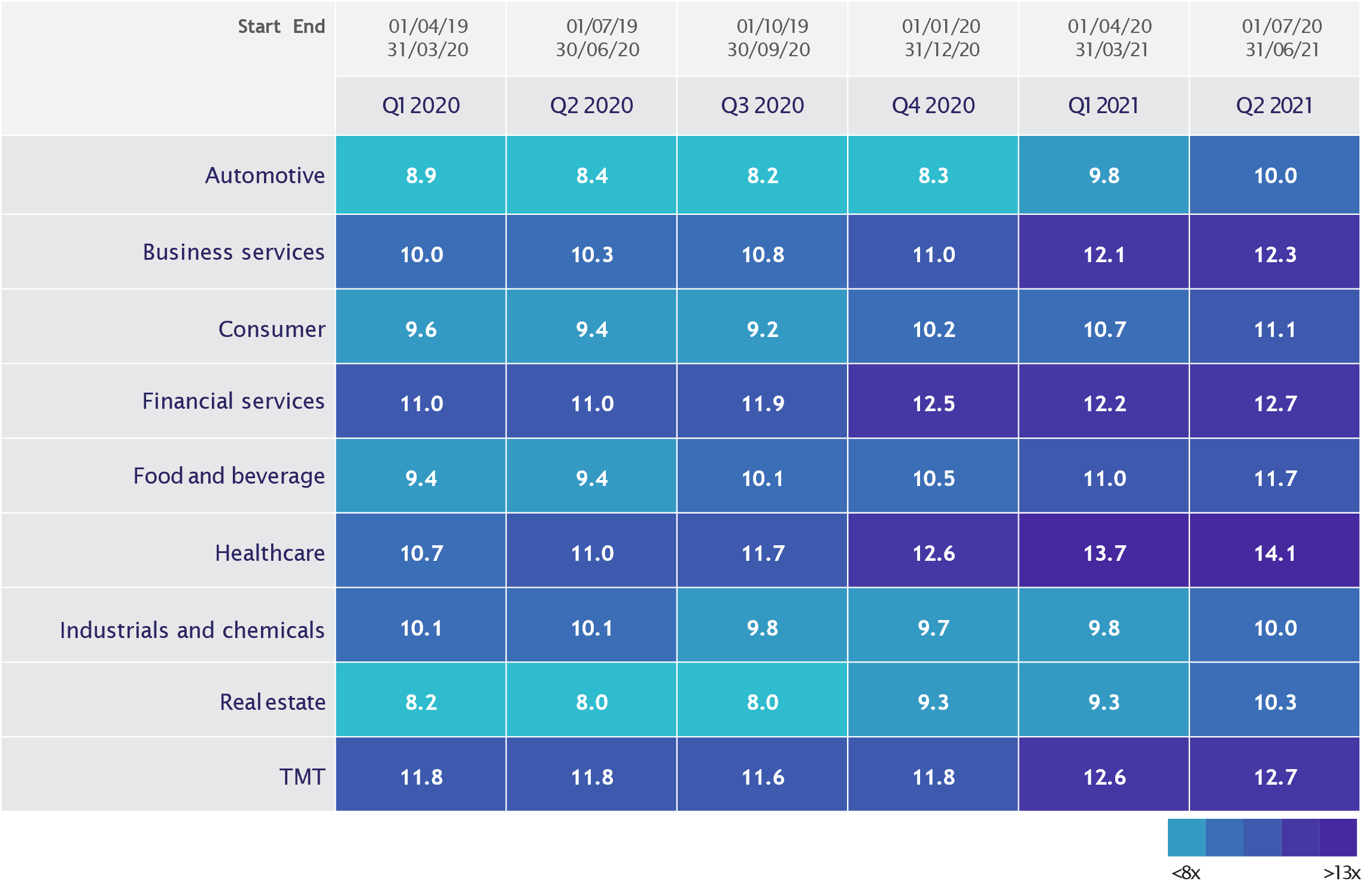