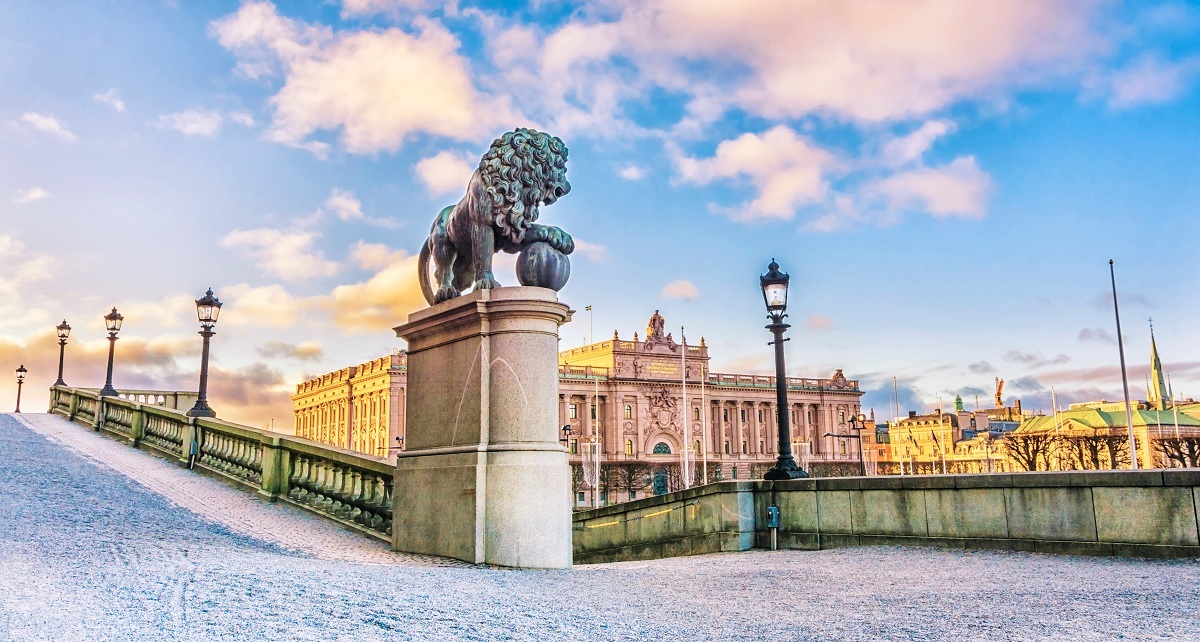 European PE dealmakers appear to have quickly adjusted to the post-pandemic dealmaking environment – delivering record deal value during the first quarter of the year. This follows on from a resilient performance in 2020, which saw annual deal volumes decrease only marginally despite the widespread disruption caused by the COVID-19 pandemic.

A renewed sense of confidence in the European PE market is reflected in a steady increase in valuations over the course of the year. Deal multiples saw four consecutive quarterly increases to reach 11.5x in the first quarter of the year – a new high.

The sought-after TMT and healthcare sectors generated the highest multiples across sectors, with both displaying resilience amidst the pandemic.

In terms of deal size, the majority of deals continued to take place within the sub €50m price bracket. Deals valued at over €1bn saw the sharpest percentage hike in volume quarter-on-quarter, highlighting a return in confidence in megadeals. 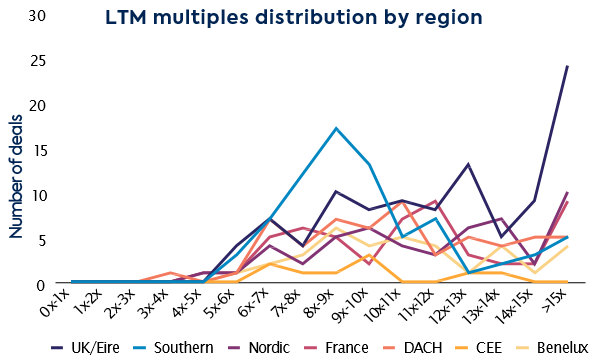 The top-end of the market also continued to generate the highest valuations. With an average multiple of 15.4x, deals valued between €500m and €1bn attracted not only the highest valuations in the first quarter, but the largest increase in multiples quarter-on-quarter. Multiples for deals within the +€1bn category also saw a quarterly rise, increasing to 14.2x in the first quarter of the year.

Deals valued between €250m and €500m also saw a sharp increase in valuations, jumping to 13.9x in Q1 – the highest average multiple in over two years. Deal volumes also registered a healthy increase compared to the previous quarter – posting the highest quarterly volume on record.

While quarterly multiples within the €50-€100m segment increased slightly to 10.2x quarter-on-quarter, average multiples for deals valued between €100m and €250m decreased to 10.7x. This demonstrates that while appetite within the top-end of the market is heating up, competition for deals within the midmarket appears to be cooling. 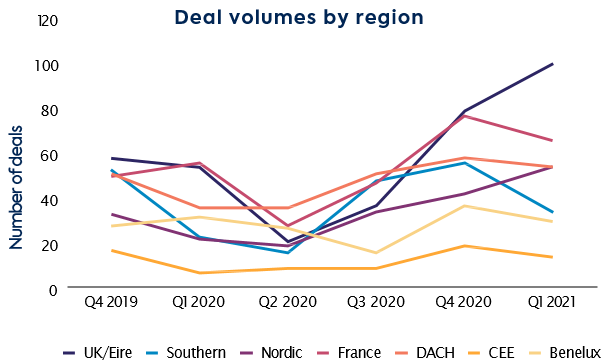 The UK and Ireland posted the highest valuations across Europe – and the highest quarter-on-quarter increase in multiples – with averages jumping to just below 13x in the first quarter. The region also saw the largest number of deals across Europe for the second quarter in a row – increasing by 27% compared to Q4 2020.

Building on its strong performance in Q4 2020, the Nordic region delivered a solid valuation increase in Q1 – posting an average multiple of over 12x for the first time in over two years. Deal volume saw three consecutive quarterly increases to post a new record of 53 deals in Q1 – marking a clear return to pre-pandemic levels of activity.

The Benelux region also saw a steep increase in multiple averages, increasing from 10.3x to 11.5x quarter-on-quarter. Despite this increase in valuations, deal volume dropped 19% compared to Q4 2020 and remains marginally below pre-pandemic levels. 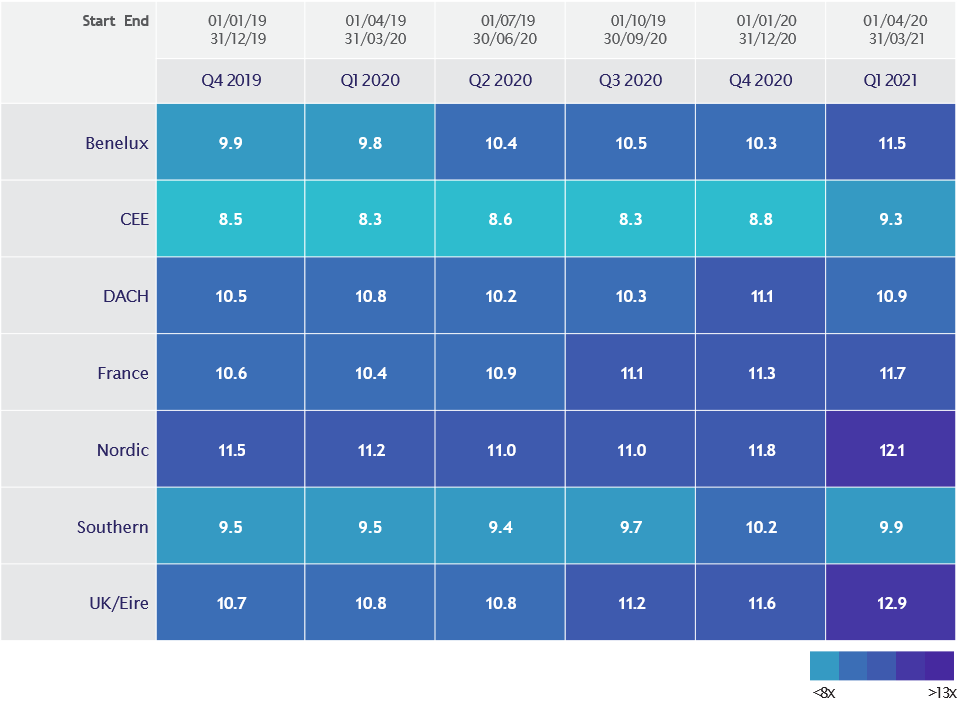 After experiencing an increase in demand amid the pandemic, the healthcare sector continued to see the highest multiples across all sectors. Average quarterly valuations reached 13.7x in the first quarter after four consecutive quarterly increases. This marks a sharp increase from the 10.7x recorded in Q1 2020, highlighting how the COVID-19 pandemic has ramped up competition for deals within the sector.

Continuing the strong performance witnessed in 2020, the TMT sector was host to the largest number of PE-backed transactions for the fifth quarter in a row, with volume increasing 3% compared to Q4 2020 to deliver the strongest quarter on record. Demand for TMT assets has soared during the pandemic, with the sector posting the largest year-on-year increase across all sectors in the first quarter. The sharp rise in activity pushed up valuations to 12.6x in the first quarter – from 11.8x in Q4 2020.

Appetite for financial services assets, meanwhile, continued to be high in Q1 2021, with the sector securing an average multiple of 12.2x. While down slightly compared to the 12.5x recorded the previous quarter, this still represents a significant uptick from pre-pandemic levels.

With an average multiple of 9.8x, the automotive sector achieved its highest valuation in over two years in Q1 – jumping from 8.3x in the previous quarter, while deal volume remained stable. Valuations within the food and beverage sector, meanwhile, have been steadily climbing over the past year, reaching 11x in Q1 2021 following three consecutive quarterly increases. Deal volumes within the sector are also on the rise – with activity returning to pre-pandemic levels. 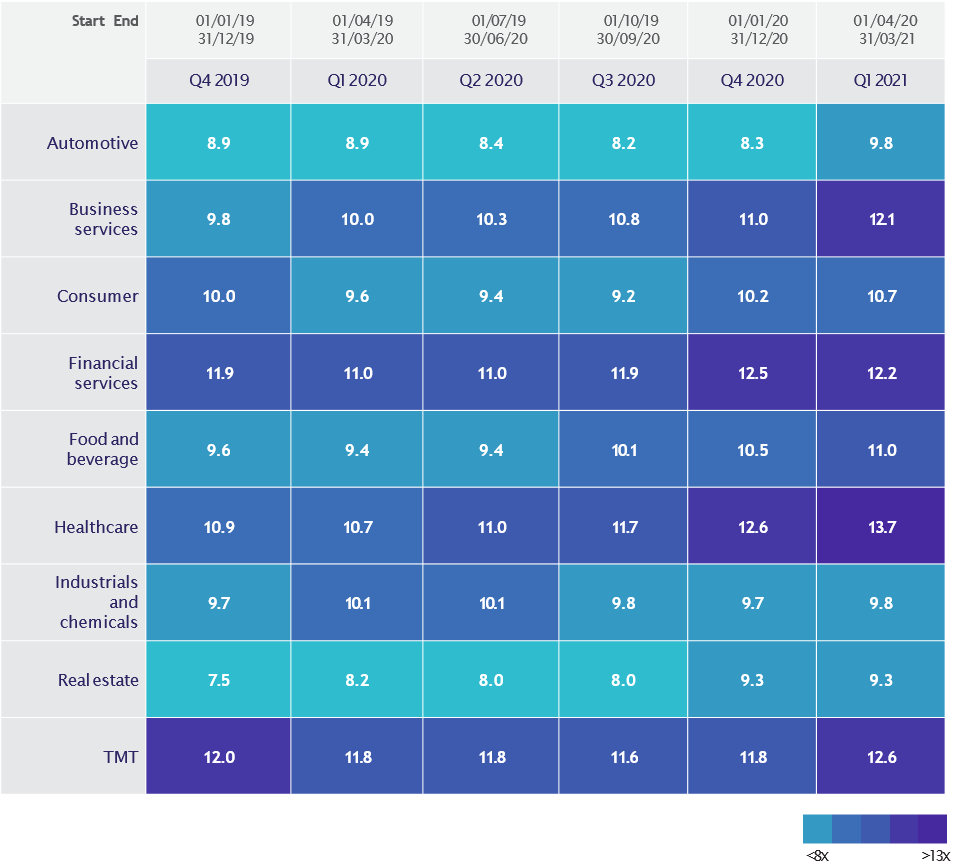