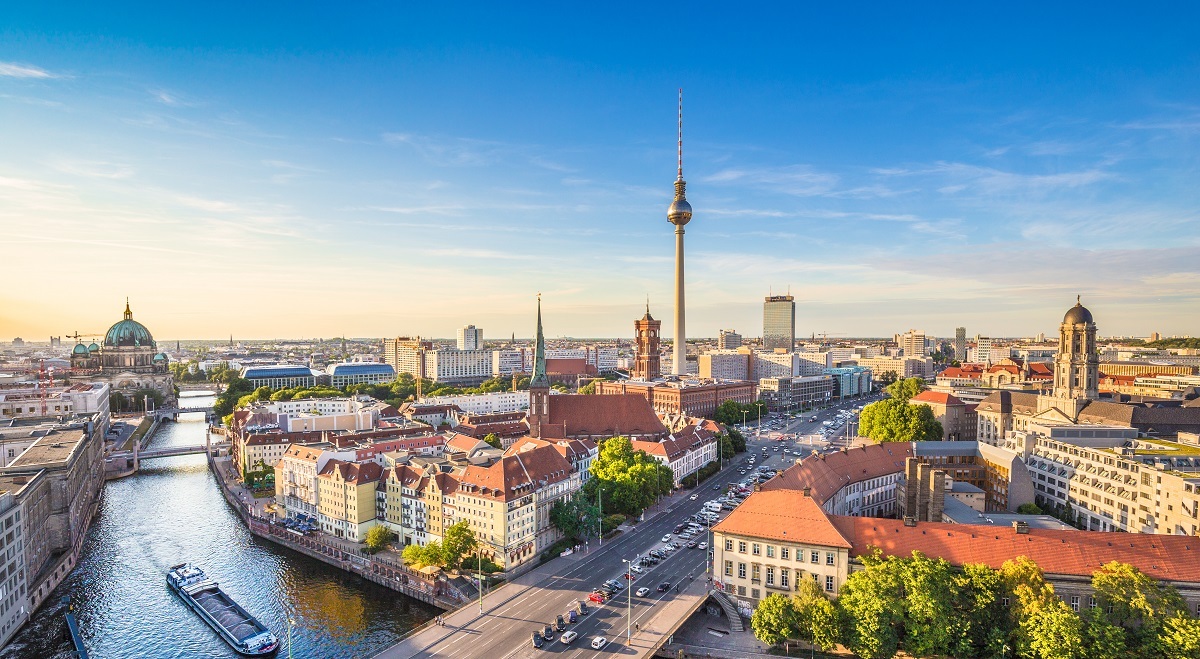 The unprecedented impact of the COVID-19 pandemic sent shockwaves across the European PE community. While the European deal market was initially hit hard by the ensuing crisis, PE dealmakers were quick to adapt to their new climate. A strong performance in the second half of the year meant that any drop-off in activity was not as pronounced as was first feared, with 2020 deal value and volume falling by just 5% and 6% year-on-year, respectively.

The TMT sector continued to generate deals throughout the year, accounting for the largest number of PE-backed transactions in 2020. The industrials and chemicals sector posted the highest annual deal value across sectors, as the €17.2 billion sale of Germany-based lift manufacturer ThyssenKrupp Elevator to Cinven Partners, Advent International and RAG-Stiftung pushed up overall value in the sector.

European average multiples reached 11x in 2020, 6% ahead of the previous year, as firms looked to deploy high levels of dry powder amassed during the crisis. The highly sought-after healthcare and financial services sectors were key UK/Eire drivers of activity – both with average multiples of 12.5x or above in 2020. The Nordic region also saw a marked uptick in valuations, posting a record final quarter.

PE displayed resilience in 2020 despite a challenging climate, and the strong rebound seen in the second half of the year signals a healthy year ahead for dealmaking. The financial services and technology sectors will continue to drive activity as firms look to deploy record dry powder. And the global vaccine drive hopefully marks the beginning of the end of a period of significant economic turmoil.

European PE volume rebounded quickly following the initial shock of the pandemic, with a robust Q3 performance followed by a record number of deals in the final quarter
of the year.

This renewed activity served to push up valuations across the continent – particularly within the highly sought-after healthcare, TMT and financial services sectors – as PE firms looked to deploy cash held back during the crisis. At 11x, average multiples paid in PE-backed transactions across Europe reached a new high in the final quarter of the year.

The Nordic region recorded the highest valuations across Europe, with average multiples jumping to nearly 12x

The Nordic region recorded the highest valuations across Europe, with average multiples jumping to nearly 12x in the fourth quarter. This is the largest quarter-on-quarter increase across Europe.

With multiples exceeding 11x for the first time, the DACH region also set a new regional record, while achieving the second highest multiples across Europe in Q4. In line
with the European trend, deal volume registered an uptick compared to Q3, finishing the year 14% above Q4 2019.

The UK and Ireland saw the largest uptick in deal volume across Europe – overtaking the DACH region to become the most active region in Q4. Deal volume more than doubled Q3’s figure to reach a new record. In addition, average multiples for Q4 hit a high of 11.6x.

The TMT sector has proven resilient to the COVID-19 pandemic, continuing to attract interest from PE buyers during an uncertain year. Reflecting the growing popularity of TMT assets, the sector was host to the largest number of PE-backed transactions for the fourth quarter in a row. Deal volume within the sector shot up 35% compared to Q3. Increased activity is pushing up valuations, which recovered throughout the year to reach 11.8x in the final quarter.

The industrials and chemicals sector also attracted a healthy number of deals during the fourth quarter. While deal volumes have recovered from the dip in activity seen in Q2, they have not yet returned to pre-COVID levels, with Q4 volume down 14% compared to Q4 2019. In line with deal volumes, multiples grew throughout the year to reach above 9x.

Having registered the highest multiples for much of the year, the financial services sector continued to perform well in Q4. However, it was overtaken by the healthcare industry, which saw its average multiples rise to 12.6x in Q4.

With a multiple of 10.2x, the consumer sector broke the double digit barrier for the first time since Q4 2019. PE transaction volumes reached record heights in the fourth quarter, highlighting the enduring appeal of consumer assets amid the COVID-19 pandemic.

In line with the historical trend, the largest number of deals took place within the sub €50m price bracket in Q4. Deal activity within this category remained relatively stable compared to pre-COVID levels. For the third quarter in a row, the lowest number of deals took place within the +€1bn category, indicating potential caution at the top end of the market following the outbreak of the COVID-19 pandemic.

Deals within the €1bn mark attracted the highest multiples in the fourth quarter, at 13.8x, although this was a drop from 14.3x in Q3. The €500m-1bn range was not far behind with a
multiple of 13.7x. This represents a marked increase compared to pre-COVID levels, highlighting an increasing competition for deals within this price bracket.

Deals within the €50-100m category saw a significant quarterly increase in multiples in Q4, exceeding 10x for the first time on record. In addition, deal volume within this price bracket more than doubled in the fourth quarter.

In this quarter, the Multiples Heatmap focuses on France, which has been one of the busiest PE markets in Europe during 2020, and on the consumer sector, which saw a sudden increase in activity in Q4 2020. 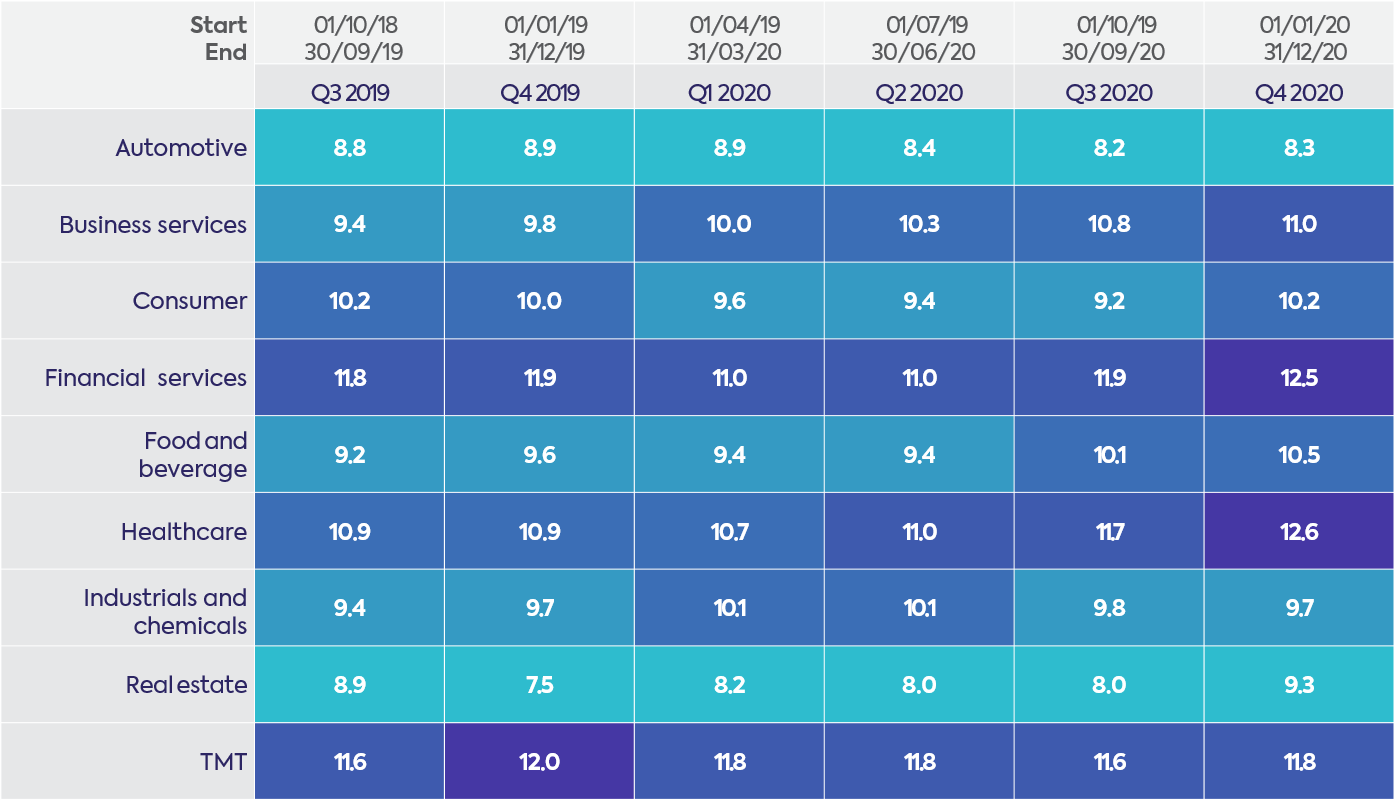