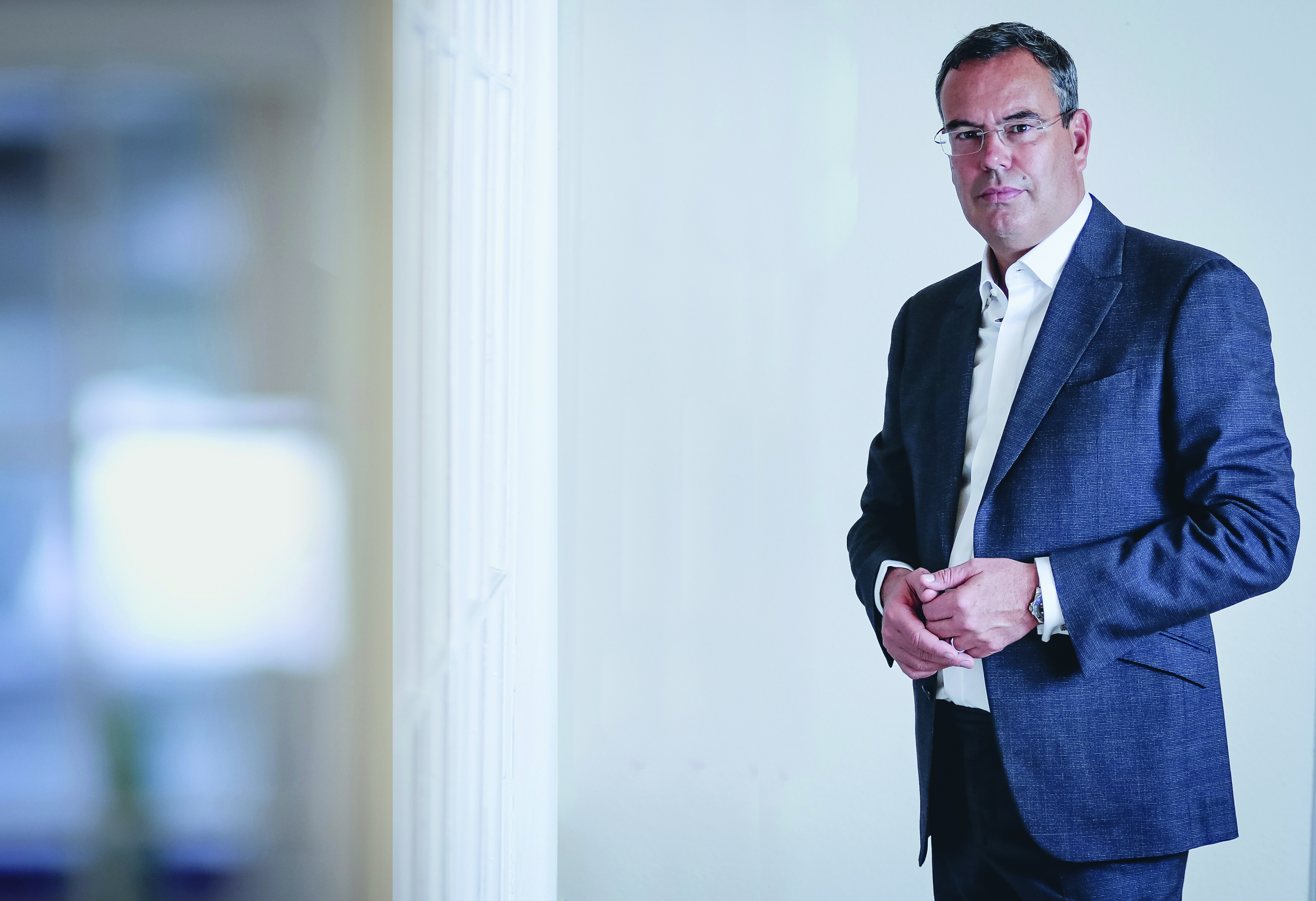 Not since the very creation of the automotive industry has it faced such huge challenges. As Markus Doerr says, right now not only are OEMs dealing with the headwinds of Brexit, trade wars and a slowing Chinese and global market, but also grappling with the need to completely transform their businesses and invest in shared mobility, electrification and automation.

“It all makes for a particularly challenging time. OEMs need to decide where to put their money, yet at the moment it is difficult because the market overall is going down, the volumes are dropping, and China is extremely difficult. All these factors make it difficult to absorb the R&D investment needed right now,” he says.

“We are talking billions of euros of investment in powertrain, billions in autonomous driving and connectivity. And then there is also the investment needed into shared mobility concepts and subscription models which some OEMs actually don’t really like that much because it is a threat to their business model.”

Doerr says in the past the strength of the market would have ensured that the higher R&D cost could be absorbed.

“But right now the music has stopped playing and OEMs realise they have substantial R&D costs and capitalexpenditure, and need to absorb that. We have a combination of a market that is going down in key geographies, and at the same time spending commitments that are very difficult to cut.

"Some OEMs have deep enough pockets to play, but there are others that may find it very difficult, and what you see is that even those with deep pockets are now coming together to jointly stem the investment needed. A good example was BMW and Daimler recently saying they would invest €1bn in a mobility joint venture."

However, Doerr believes this market flux is temporary. “Ultimately these new trends, which are now either in full swing or approaching market entry, are positives for the industry. OEMs will emerge stronger and in the long run will benefit from the investments they are making now. Also, in time, their investment and R&D will be better channelled because they will know more what the customer wants.”

Doerr stresses too that all this change is very positive for a company like Ricard oand Engineering Service Providers (ESPs) in general.

“Every engineering service company benefits from change because that change means more engineering work.
Right now OEMs do not actually know what the mix is going to be between the different powertrain options, but they need to make an investment into hardware and production facilities, and to line up supplier contracts.”

The result, he adds, is that the ESP market has now become very competitive with many new entrants either coming from specialised fields such as connectivity, electrification and autonomous driving, or coming from emerging markets.

Ricardo, a global engineering, environmental and strategic consultancy based in the UK, has been looking at these trends for a long time across the wider transport and energy sectors. For instance, in terms of the automotive industry it has specifically been looking at powertrain electrification and emissions improvement.

Adds Doerr: “We have a lot to offer OEMs because we have real automotive experience, total powertrain experience, so that they can trust that we can take a project to production, and critical size. One way you de-risk things in a risky world is to have a partner that you can trust and which has proven time and again that it can deliver a programme. What also helps us is our niche manufacturing capability which is relevant to both established OEMs and new entrants.”

Meanwhile he says OEMs are also
outsourcing more services in areas such as hardware technology and Artificial Intelligence (AI). “OEMs are also making strategic acquisitions because a lot of the technology they need will come from tier one suppliers.”

He adds that while electrification is something that OEMs will want to do at least partially in-house, when it comes to connectivity and autonomous driving, then functions will be significantly
outsourced, especially in terms of hardware. “There are very few OEMs that would produce sensors, cameras or LIDAR for autonomous driving.”

So where are OEMs putting their money right now? “I would say electrification is very high on the agenda, but it is also probably closer to what OEMs have always done as they have always done powertrains. Is electrification therefore a safer bet for OEMs? It is still a massive shift, but a lot of them have been looking at this over many years,” says Doerr.

“Electrification may increase the cost of the vehicle as the battery cost is substantial, so managing the product cost is a key area of focus for OEMs.”

Ricardo is investing in both the electrification and autonomous sectors, having recently set up a technical centre in the US in Santa Clara, in the heart of Silicon Valley, alongside its existing facility in Detroit. “We recognised quite early that the US automotive market isn’t just about Detroit, but that there is a whole new set of players emerging, and many of them
are based on the West Coast. We felt we needed to be closer to these players which have acted as a catalyst for the whole industry to embrace these trends. If you take Tesla, it has achieved what many OEMs considered unachievable, and established OEMs are now coming
out with vehicles which will compete head on with them.”

Ricardo is also presently engaged in a large number of electric vehicle battery programmes. “We help with the chemistry selection, the cell format selection, the packaging of the cells, and the thermal management. We can support in a lot of different areas and we can also assemble the battery too.”

What about autonomous driving, where is that market right now?

Adds Doerr: “At the moment there is a lot of talk about achieving level 4 autonomy which is ‘mind off and hands off’ in specific conditions. But if you look in detail at recent announcements it is often just prototype vehicles being deployed in areas under special conditions. If we are talking about real urban driving or long distance driving, I think autonomous driving is still quite far off. The challenges are very significant because the human being is a difficult benchmark to crack. There are also issues around weather considerations, the state of roads and hazards, the fact that sensors need to be clean at all times, not to mention a host of ethical, regulatory and insurance issues.”

Nonetheless, he still believes that advanced driver assistance systems have a “great future”. “I fully believe that level 4 automation will be something that will happen and be understood under restricted conditions. But I think it’s still quite a long way until we get vehicles that have no steering wheel or brake pedal.”

Ricardo is a global strategic engineering and environmental consultancy that specialises in the transport, energy and scarce resources sectors. Its work extends across a range of market sectors including passenger cars, commercial vehicles, rail, defence, motorsport, energy
and environment, and its clients include transport operators, manufacturers, energy companies, financial institutions and government agencies.

In addition to its technical consultancy services, it has in-house engineering capabilities that enable it to design and deliver high-quality prototypes and low-volume manufacturing of complex products and assemblies, including engines, transmissions, electric motors
and generators, battery packs and fuel cell systems.

The company traces its roots back more than a century to when it was founded by Sir Harry Ricardo, one of Britain’s greatest engineers of the early 20th century.

Meanwhile amid all the excitement about electric and automation, Doerr adds that it is easy to forget that diesel still has a major role to play in the industry. Ricardo has long been a major player in the diesel engine market.

“When you look at diesel you need to differentiate between the different segments. Diesel is still very relevant for sectors such as commercial vehicles, off highway equipment and marine engines where it is still the combustion engine of choice.

“If you look at car manufacturers, yes we have seen a collapse of the diesel share in many markets. But I don’t think it’s a dead market and there will be interest in the medium term for diesel engines in the passenger car market. These engines are still important for CO2 compliance and it will be very difficult for OEMs and governments to meet environmental targets without the diesel engine. At the same time the diesel technology has improved, while in terms of compliance there is now a lot of scrutiny in the real world, not just on the test stand. The latest emission level diesel cars are clean cars. The reason every premium vehicle manufacturer is very exposed to the diesel market is precisely because it is a very good powertrain choice from a CO2 and efficiency perspective.”

Finally, what about the Brexit challenge? While agreeing that it is “very disruptive” to the automotive industry as shown by a number of recent announcements in the UK, Doerr says Ricardo is a lot less exposed to the consequences because only a relatively small fraction of its business is manufacturing. “However it is a different story if you are stocking up for a 2,000 units per annum engine production run or a much larger-scale engine manufacturing operation. The latter is a different magnitude of challenge.”

Having said that, he says the impact of Brexit on free movement of labour is an issue. “Also, there will be a certain perception that it is more difficult to deal with a UK company. Nonetheless I do believe we are well prepared.”