‘I’m helping out at the final day of Camerata’s “Horrors of War” project at Webster Primary School on the subject of the Holocaust. Actually, ‘participating in’ is more apt as most of the hard work has already been done by the two Year 6 classes, together with the Camerata’s superbly talented Richard, Joe, Hannah, Nancy and Jenny. The children have been writing music and lyrics all week and with Joe’s help, layering actions on top. English isn’t the first language for some of the children, making the song lyrics particularly impressive.

‘After some very energetic warm-ups for voice and body we get stuck into the songs class 6A have written during the week – “Respect the Fuhrer”, “Tiptoe” and “The Horrors of War.”

‘”Respect the Fuhrer” perfectly reflects the menacing control of Hitler, heightened by the children’s marching feet. “Tiptoe” – in complete contrast, the children creep around, making themselves invisible by creating tableaux in freeze frames. “Horrors of War” – this will be the finale, a lament to war, pulling all the themes together. It’s a solemn and thought-provoking song with all the children belting out the words like they had great meaning. 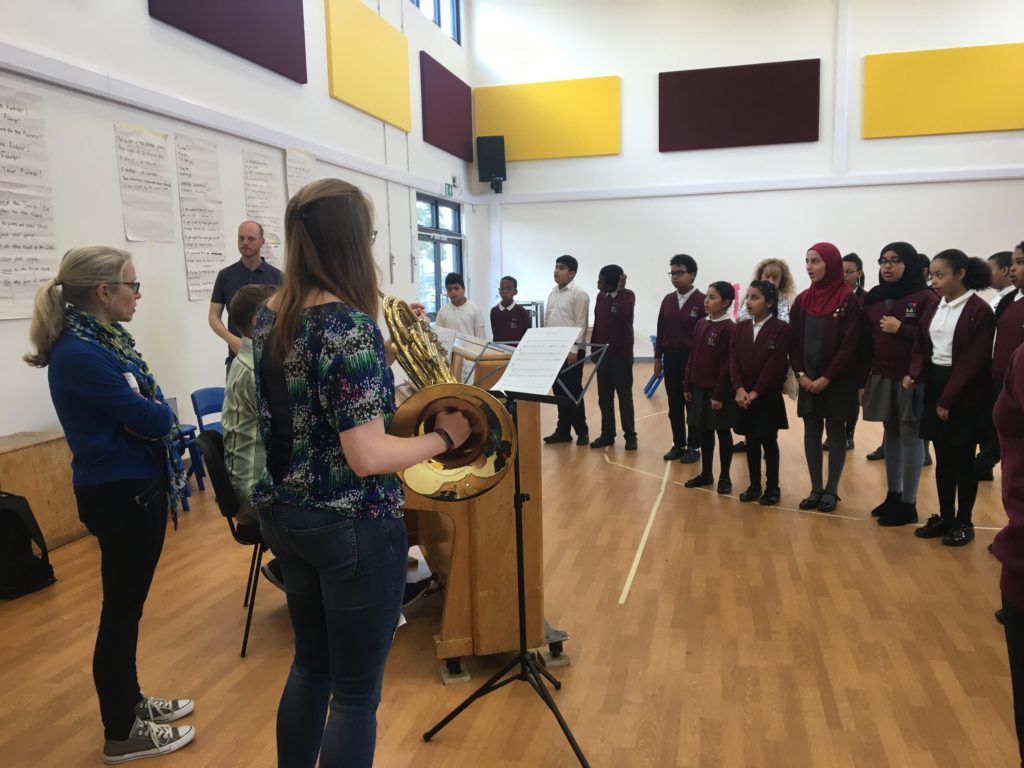 It is truly heart-warming to see all the children being inspired by the music and actions, the group participation and their enjoyment of performing in front of their audience.

‘After lunch it’s the turn of the lively class 6L. The key question for them is “where’s Hannah, and who’s going to be the goat?”. Step forward Jenny with her French horn as Hannah’s replacement, and, luckily for me, also as a stand-in goat. As newcomers on the day we were both curious to understand the connection between a goat and Germany under Nazi rule. All would become clear later.

‘The children kick off with the dramatic “Night of the broken glass.” There’s a lot of energy in the room as they get into character, spreading news that the ‘Furious Fuhrer has struck’, with fabulous accompaniment from the Camerata musicians.

‘”One precious item”- what would you take with you if you had to leave your home with very little warning? We start off with poignant, thoughtful lyrics – the children singing about the priceless items: a photograph, a storybook, a ring they would take… but then… a goat!! Cue Jenny with her fabulous improvisation, mimicking the sound on her French horn whilst simultaneously weaving in and out of the children, goat-like, and the children clearly enjoying the humour in their singing.

‘A quick run-through after break to get the stage directions and links right, count the correct number of chords into the music, sit up straight, quietly listen to each other whilst not performing, and be ready to perform…. and then it’s time to perform their piece to the rest of the school.

‘After an introduction to the audience of family and friends, explaining about the project, and how the work is all the children’s, we’re straight into the performance, which is faultless – a credit to Camerata, their teachers, family and the children themselves. With the final important message about the horrors of war resonating in our ears, it is truly heart-warming to see all the children being inspired by the music and actions, the group participation and their enjoyment of performing in front of their audience.’