revenues of over €74m in the year, representing a 9% growth

Clearwater achieved revenues of over €74m in the year, representing a 9% growth on last year. The business saw a strong performance across all sectors and service lines contributing to the sustained performance of the business.

For the sixth year running, the European Debt Advisory team experienced strong growth, with over 40 mandates completed across the various territories, representing debt raised in excess of €6.9bn

This increase saw Clearwater expand its bespoke debt team with two new recruits and three senior promotions during the year. Among the key deals for the team, the German team advised Wieland-Werke AG on the structuring of a syndicated loan totalling €1.4bn and €310m of promissory notes for the refinancing of the acquisition of US-based Global Brass and Copper Holding and the UK team co-advised Daisy Group on the second phase of its recent refinancing with Ares of over €1bn of debt facilities, one of the largest private credit financings in Europe.

PE involved in 45% of deals during the year, solidifying Clearwater’s second place on the PE advisory Europe exits league table

Clearwater’s deep heritage in private equity (PE) continues to grow, with PE involved in 45% of deals during the year, solidifying Clearwater’s second place on the PE advisory Europe exits league table. Some notable transactions included: the UK team advising on the management buy-out of the corporate clothing division of US-based Tailored Brands, Inc (NYSE:TLRD) in a deal which values the group at €56m. The French team also advised Parquest Capital and the shareholders of 5 Santé, a major French player in private post‐acute care clinics, on the group’s disposal to Korian. The Italian team also advised investment firm Platinum Equity on its acquisition of a majority stake in marine contractor De Wave Group from Xenon Private Equity.

The Industrials and Chemicals and Business Services teams were the most active with deal completions, closely followed by the Healthcare and Real Estate teams.

The Industrials and Chemicals sector team experienced an exceptional year with average deal values finishing at four times the value of 2019. Key deals for the team included: the German team advising Oiltanking GmbH, a subsidiary of the Marquard & Bahls AG group, on a €1.5bn comprehensive refinancing and the UK team advising on the management buy-out of SRL Traffic Systems supported by LDC and Crescent Capital. 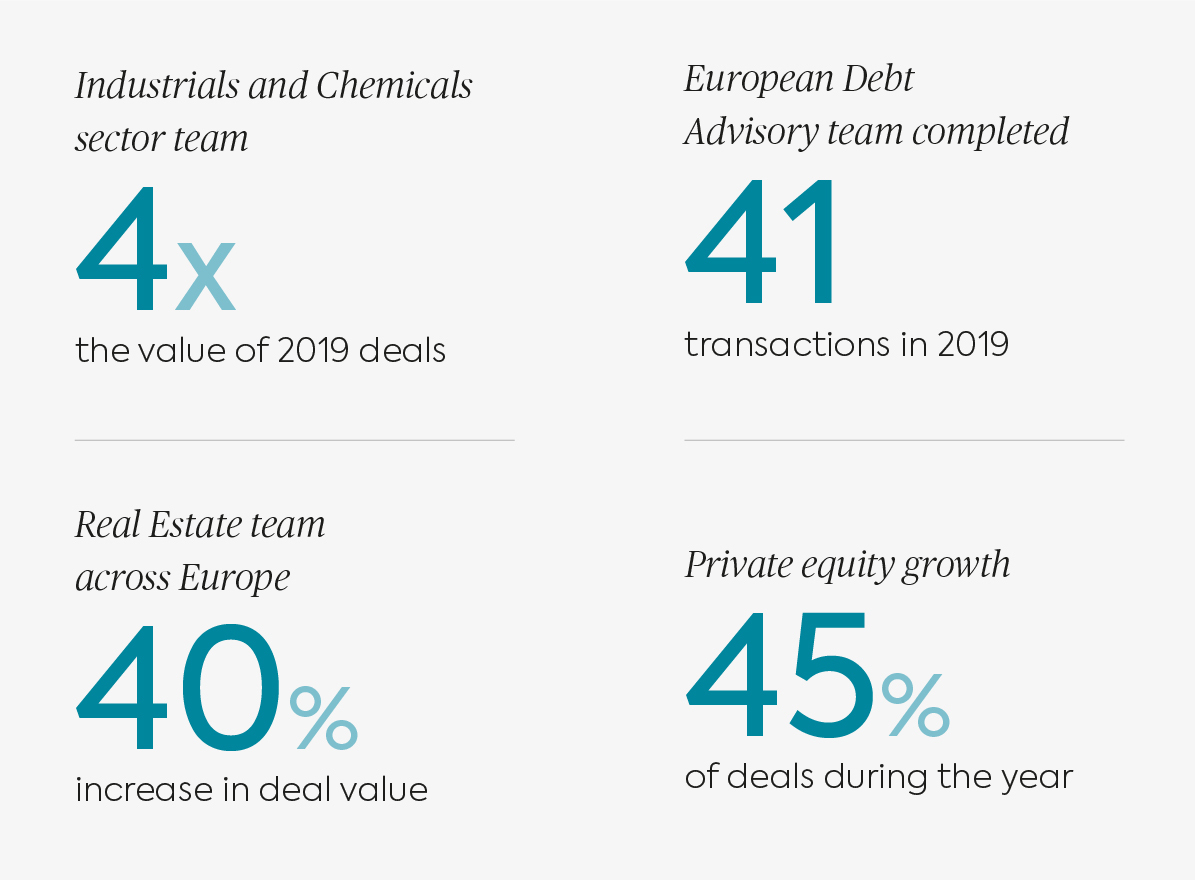 Likewise, the Business Services sector team experienced an active deal calendar which included the UK team advising MML Capital and the shareholders of Learning Curve Group, an education and training specialist, on its sale to leading private equity firm Agilitas. The Healthcare sector team also completed notable deals including the French team advising the shareholders of Hôpital Privé du Confluent on its sale to Vivalto Santé and Icade Santé.﻿

The Real Estate team across Europe has expanded, doubling the number of deals compared to the previous year and increasing the average deal value by 40%. The French team completed nine real estate transactions in the year including advising Tikehau Capital and Foncière Atland on the sale of a real estate portfolio of 22 assets operated by Elis and advising Harvestate AM on the fundraising of its new land redevelopment investment fund ‘Terrae Optimae 1’ in partnership with Nexity. Clearwater has recently bolstered the team with the appointment of Joe Dyke to Partner and Head of Real Estate Finance in the UK.

Clearwater continued its growth in Europe with the integration of Milan-based Brera Financial Advisory in September 2019. The team in Milan completed almost double the number of deals in comparison to the previous 12 months, key deals included advising Italmobiliare Investment Holding on its investment in Officina Profumo Farmaceutica di Santa Maria Novella, a premium perfume and cosmetics company.

Clearwater’s success was reflected in its recruitment activity and talent development across Europe and China, which saw 25% of the team promoted during 2019. The business also recruited partner Richard Goldsack to head up the new Leeds office in the UK, which opened in January 2020. Clearwater is committed to increasing diversity across the workforce and this year made headway with 30% of junior hires being female.

The business is further committed to being a great place to work and efforts were reflected in the 2019 team engagement and opinion survey, which saw an engagement result of 87%, outperforming the norm for professional services with results in all key engagement themes, significantly above the benchmark; from supportive leadership to a positive environment and culture to the growth opportunities available.

“The success we have achieved over the past year would not have been possible without the trust our clients put in us to deliver on their ambitious goals, the energy and dedication of our team and the support of our professional contacts. The period that the world has entered into as a result of the COVID-19 crisis is unprecedented and unsurprisingly has affected our stakeholders and our business. However, it has also shown the resilience of our business; I am immensely proud of the adaptable nature of our team who have shown dedication and commitment to both the business and our clients in light of unparalleled challenges.

Clearwater International continues to maintain its strong market position through our geographic and sector diversification. Our financial track record and results support a healthy balance sheet and strong cash position. While the uncertainty will undoubtedly have some impact on our business, I am confident that our continued origination approach to the market, will ensure Clearwater remains well-positioned through this period and beyond.”